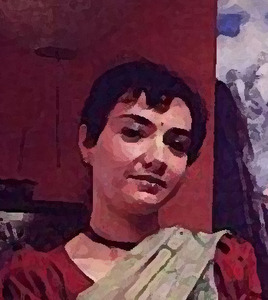 COMMISSIONS:
2011: "Pancha Tattva" for a client in Mexico

2011: Book cover of "Partha Sarathi" for publication of the Bhagavad Gita

2011: "Krishna instruct Arjuna" for a client in India

2011: "The bathers" for a client in Switzerland

2010: Multiple paintings of Indian ladies reclining for the Time and Space Gallery

Here are some paintings about surfing. I took a few famous paintings and gave them a surfing slant. Then i called that series: The Amadeus Series.

Acrylic painting on canvas. This surfer is now riding The Great Wave off Kanagawa! In the background please notice mount Fuji. This is a famous woodblock printing by the Japanese artist Hokusai that I used for our surfing purposes. "The preeminence of this print said to have inspired both Debussy s La Mer and Rilke Der Berg can be attributed, in addition to its sheer graphic beauty, to the compelling force of the contrast between the wave and the mountain. The turbulent wave seems to tower above the viewer, whereas the tiny stable pyramid of Mount Fuji sits in the distance. The eternal mountain is envisioned in a single moment frozen in time."
This original painting is currently for sale, for more info please contact the artist. And you can purchase any print size of this piece here:
http://fineartamerica.com/featured/the-great-wave-amadeus-series-dominique-amendola.html
for more info please contact the artist.

“Dream on the beach (after Dali)”

Oil on canvas, 20" x 24". Dali had a very weird view of the world. I think it looks better with the 'surfers' touch!
This original painting is currently for sale. Please contact the artist directly to inquire about purchasing this original. Or if you prefer, you can order any print size from here: http://fineartamerica.com/featured/dream-on-the-beach-by-dali--the-amadeus-series-dominique-amendola.html

“The persistence of memory (After Dali)”

Dali liked surfing too. Or did he?

This original painting is currently for sale, and if you prefer you can also purchase any print size from here:
http://fineartamerica.com/featured/the-persistence-of-memory-amadeus-series-dominique-amendola.html

This painting one of the most familiar images in 20th century American art, and one of the most parodied artworks within American popular culture. Here is yet another interpretation for my Amadeus series, with a surfer's touch.
American Gothic is a painting by Grant Wood from 1930.
This original painting is currently for sale, or you can purchase any print size here:
http://fineartamerica.com/featured/american-gothic-amadeus-series-dominique-amendola.html

“Vincents bedroom in Arles for surfers”

A humorist version of Van Gogh bedroom for surfers and other lovers of fun art. Please notice, the surf board, the figure on the bed reading the surfers path, and a portrait of Che Guevara on the wall. This is painted in Van Goghs post impressionist style. A note on the original painting by the artist Vincent Van Gogh:When the painting is viewed at about arms length, or at the distance at which the artist would have been working at his easel, one receives an overwhelming impression of realism. One must, however, look at the full-sized painting, not a smaller reproduction. An analysis of the actual forms as represented in pictorial space by van Gogh reveals strange incongruities vis-a-vis Euclidean anticipations. A tracing of the perspective lines in the painting shows that he maintained neither the fixed viewpoint nor the fixed eye-level necessary for a conventional representation of Euclidean space; even single objects have multiple convergence points. ( from Patrick Heelans article )
This piece is not for sale. However you can purchase any print size here:
http://fineartamerica.com/featured/vincents-bedroom-in-arles-for-surfers-amadeus-series-dominique-amendola.html

I visited India many times and got to paint quite a few paintings over there. I even got interviewed on National TV about my art. Here you will find many pieces such as street scenes, romantic scenes and daily life scenes.

Original oil on canvas. A typical street scene in South india, with pedestrians, cars, fruits vendors, rickshaws, motocyles, bicycles, the heat, the sun. Actually everybody is so patient. Any Europeans or Americans, would easily loose their tempers a hundred times over. But here in india, there is no road rages, insults exchanges from one driver to the next, or even pedestrians to drivers. The style is impressionist, the technique is worked both with a brush or a palette knife.
This painting is no longer available, however, you can purchase any type of prints and any size you like here:
http://fineartamerica.com/featured/india-street-scene-dominique-amendola.html