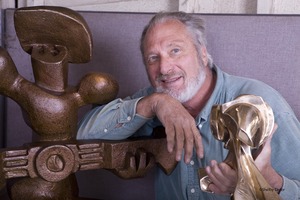 Larry Rankin is a patriotic, all American, seasoned man, who abides by the kind of values that built this country. He is tall, very strong and gentle of heart. He is solid and unshakeable. In these tumultuous and unsure times, it is comforting to have his sculpture present. They have strong and unshakeable foundations. They carry a strength and a sense of wholeness. They will give you strength and comfort and fortitude in unsettling times.

When Larry walks into a room, it's as if the room turns into a fireplace and he becomes the match that sets the room aglow. His smiling eyes let you know that he has both inspected you and accepted you almost instantly. His breadth of personal human experience, his attention to form and detail, and his intense zest for living fully all find their residence in his sculptures. Somehow, in some primal way he seems to breathe his lifeforce into his art allowing his pieces to awaken before your eyes.

Through his child eyes and ears, country life in Indiana etched its way into the fabric of his being. At 14, his father died suddenly, and his childhood was over. Then Viet Nam called him to fight a battle his country couldn't accept. His wife divorced him. He came home empty and angry. Many people would have become hard and bitter. But for Larry, those experiences were the sand within the oyster that became lustrous pearls, called sculpture with the signature, Larry R. Rankin.

He enrolled inNorthern Arizona University and later graduated with a Bachelor of Fine Arts degree. His appetite was insatiable. He was the last one to leave the sculpture studio at night and the first to arrive in the morning. He sneaked into the studio so he could work through the night. His pieces were powerful. The chairman of the department described his B.F.A. exhibit as "the finest in the University's history." Another professor with 35 years experience said he could count the really successful graduates on one hand...and Mr. Rankin was one of them.

He emerged inCalifornia as the young starving artist...but only for a short time. His works were soon being sold throughout Beverly Hills and up and down the coast. He has had both one man shows in both galleries and museums. He has been represented by galleries that have been in New York, Chicago, San Francisco and Laguna Beach. Brotherhood, a four-ton sandstone sculpture, is on permanent exhibit at Guadalajara's Jalisco State Cultural Fine Arts Center. Dozens of galleries, museums and corporate headquarters as well as magazines and books have displayed his art.

Larry Rankin has earned a formidable international reputation. From his studio in Santa Barbara, his sculptures, made of cast bronze, carved wood and stone, range from 6" to 7 1/2'. His powerful and unusual designs convey his love of family, his sense of humor, his understanding and knowledge of abstract and non-objective form. His works are equally at home in sculpture gardens, living rooms, corporate settings, in front of large building and public facilities. This All American's strength, warmth and love of his country seeps into every landscape.

When you view Larry R. Rankin's portfolio, please click on photo and it will enlarge for a much better view of the art work. Enjoy... Thank you!

“Bust of a Woman”

“Two Heads Are Better Than One”

Polished Bronze
6" tall with Marble Base

“Wax process on "Within"”

“My Feel My Baby”