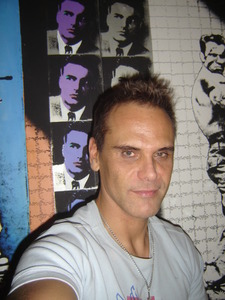 Spent childhood years on a farm near Molteno in the Eastern Cape province. The roots of his interest in art were developed by the strong influence of well known South African writer and painter Johannes Meintjes, who was his first art tutor.

I am a South African Pop Artist. The emblems and images of popular culture fascinate me. I enjoy the fact that these images encompass a wide array of subjects from advertisements, industry, politics and even sport. Although these images often seem banal and superficially beautiful on closer inspection one will always find that they address much larger issues of mankind and what it entails to be a human being in this New World.

The celebrity portrait alludes to our culture’s obsession with glamour, celebrity and physical beauty. Beauty and celebrity have become a universal world currency – stronger than the pound or the dollar. Because of over exposure to the aesthetised images of cinema and television, the younger generation always respond to a successful Pop image, since they understand the underlying aesthetic (even if only on a subliminal level).

In my art making process I felt compelled to use the techniques and philosophy of Warhol as of a point of departure. Even after all this time Warhol’s work seems current and it is still impossible to ignore. Warhol acutely understood the power of beauty and celebrity and add to that his insights into the workings of modern day industry and finance. The techniques of Warhol allows me to manipulate photography, painting and printmaking to create work that falls firmly within the Pop tradition. I do not rely solely on the silkscreen process and my academic training as a painter allows me to execute images solely by hand.

Among my portraits include Mr. Nelson Mandela. Two pieces were presented to him on his 84th birthday by the African National Congress.

Gallery Kusmikim in Amsterdam commissioned a series of the Dutch crown couple Willem-Alexander and Maxima.