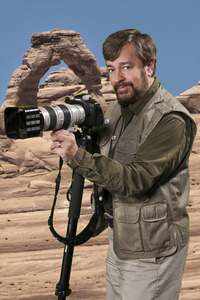 "Creative Photography is more than making a simple visual recording, it involves the innovative artistry and vision of a photographer, who manipulates the given visual elements in order to both preserve and represent the subject while creating New Perspectives."
- Larry A Brechner -

Working as a theatrical lighting designer and musical theater stage director for nearly forty years, Larry's photography has been largely avocational; mostly used in his own design and directing portfolio, or for promotional/publicity, production pictures, including actor headshots. His work with stage lighting gives him a special understanding and a unique vision for his artistic photography. He has been active as a fine art photographer for over thirty years.

Larry earned his Doctor of Fine Arts in Theatre Studies, and received his Bachelor and Master of Arts degrees from Purdue University Calumet in Radio/TV/Theater Production and Management. He works as the Auditorium Director for the School Town of Munster's (Indiana) 1000 seat theater plus Producer/Director of the Munster Theatre Company. Prior to that was the Theatre Administrator/Production Manager for The Center for Visual & Performing Arts professional theater operation Theatre at The Center, also serving as resident lighting designer. He also worked as an adjunct professor at Calumet College.

Larry previously worked as Auditorium/Theater Director for Highland's Monbeck Auditorium for 13 years. He has been active as an on-air pledge host for WYIN-TV/Lakeshore public television/radio, plus on the board of directors for Lakeshore Public TV/Radio, Leadership Northwest Indiana, and formally on the LakeNET board now on their advisory board, plus is a web site designer. He is a 1997 recipient of the Purdue University Calumet Distinguished Corporate/Community Service Award, the 2010 Purdue University Calumet Alumni Leadership Award, and the 1999 Distinguished Leadership Award from the National Association for Community Leadership. Larry is a voting member for the recording industry's Grammy Awards.

Outside of photography, Larry is a instrument-rated commerical pilot (ASEL) and active in amateur radio WB9FQS.

Read an interview with Larry at:
WHOHUB (www.whohub.com/brechner)

Colorado Plateau region that has a great deal of the iconic scenery typical of the western United States.

Arches National Park is located in eastern Utah that has natural arches that are carved over thousands of years by various forces of natural erosion in the sandstone rock.

This is a P-40E Warhawk that was a export version for the RAF in England known as Kittyhawk. It is painted to represent the aircraft flown by by Col. Bruce Holloway who served in the Flying Tigers and later in the successor Army Air Corps in the China theater of war.

This is a B-17G Flying Fortress called “Shoo Shoo Baby” by its crew flew 24 missions until May 1945 when it made an emergency landing in neutral Sweden. It was restored to flying condition and arrived at the museum in 1988.

The B-24D Liberator was for its time a long range heavy bomber that served in all theaters of WW II. It had a greater range and larger bomb load than the other heavy bomber of this period, the B-17 making it suitable for long over water operations. This B-24D “Strawberry Bitch” was based in North Africa with the 512th Bomb Squadron and was active fro 1943-44, and arrived at the museum in 1959.

The Boeing B-29 Superfortress was introduced in WW II (1944) as an eventual replacement for the B-17 and B-24 heavy bombers. Its 3700 mile (5955km) combat range carrying 20,000 lbs (9070kg) of bombs was used primarily in the Pacific theater where its long range made it effective in the island hopping campaign. B-29s served into the post war and into the Korean War era but eventually were replaced by jet-powered bombers.

This B-29 “Bockscar” was one of 36 specially modified “Silverplate” B-29s with all the armor stripped away and only the 20mm tail cannon remaining for defense specifically to deliver atomic bombs. Its sister ship, the “Enola Gay,” dropped the Little Boy atomic bomb on Hiroshima, and “Bockscar” delivered the “Fat Man” atomic bomb on Nagasaki three days later. It arrived at the museum in 1961.

At first glance, this aircraft appears to be a Boeing B-29 Superfortress in a 1960 style Air Force paint scheme. It is however the successor post-war upgrade to the B-29 designated as a B-50, with four 3,500 hp Pratt & Whitney R-4360s engines and other upgrades still essentially on the B-29 airframe, serving as a medium bomber from 1948-1954. Replaced in its strategic bombing role by the jet-powered B-47, they subsequently served in various roles. With the older B-29s being used weather reconnaissance aircraft (WB-29), 36 of these aircraft were converted to replace them as WB-50D in that role until the mid-1960s when they were retired. This particular WB-50D was the last of its kind to be retired and arrived in 1968 at the museum.

The Convair (Consolidated) B-36J Peacemaker started its development during WW II when it was believed that an intercontinental bomber may be necessary if Great Britain fell to Germany to conduct the war from North America. It was on the slow development track when that requirement was not immediately necessary. It became operational in 1948 as a long-range bomber capable of delivering an atomic bomb from North American bases. The initial models had six Pratt & Whitney R-4360 engines mounted as so the propellers were on the trailing edge of the wing. Later models added two GE J47 twin jet engine pods used for additional takeoff thrust or faster speeds over targets. The B-36 series remained in service until 1959 when they were replaced by the all jet powered B-52. The museum’s B-36J made the last flight ever of this aircraft when it arrived in April of 1959.

The Boeing B-47 Stratojet was the first operational swept wing, jet-powered medium bomber designed to deliver atomic bombs deep into the Soviet Union from forward bases in Europe. It had a three man crew with tandem seated pilot and co-pilot, and a navigator below in the nose section. It was in service with the Strategic Air Command (SAC) from 1951 until 1969, and never engaged in combat. It replaced the aging B-29s and B-50s with the long range missions covered by the six engine push-propeller, four jet-engine B-36 and later the eight jet-engine B-52. The aircraft on display is a RB-47H, which did photo/radar aerial reconnaissance during the cold war. Many times it would overfly parts of Soviet territory as part of its mission. The navigator in the “RB” series was in charge of these recon operations with the black nose section containing a powerful radar and other photographic plus sensors on the aircraft. The RB-47H remained in service until the late 1960s, with some of the electronic recon series (ERB) still operational until 1977. This particular aircraft was retired in 1966 and delivered to the museum in 1998

The Messerschmitt ME-163 was Germany’s rocket fighter/interceptor plane and actually the only operational rocket powered fighter ever. The ME-163B went operational in mid 1944 armed with two 30mm canons and a powered flight time of only seven minutes. Positioned to intercept allied bombers, in its short combat life it was only responsible for nine victories with a loss of 14 aircraft. The ME-163B arrived at the museum in 1999. It was restored by the Canadian National Aviation Museum and during that process they discovered what appeared to have been sabotage apparently done by one of the French forced labors that would have eventually caused a fuel tank to rupture and the wing to fail in flight.