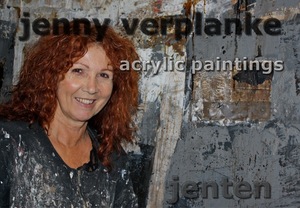 Jenny Verplanke.
Africa far away and always close by

Jenny was born in 1952 in Yzendijke and took her first steps in and around the farmyard situated amongst the Dutch Flanders polders. As a teenager she displays promising sketches and paintings and participates in several local art fairs. Still, some times passes before Jenny finally receives the chance to train further at the Art academy of Bruges…and just like good wine, nothing has been missed due to the long ripening season! A little timid in the beginning, but gradually increasing in strength and conviction, she goes to work. In the paintings there is nothing left of the shy village girl, on canvas, Jenny discovers a way to express what she cannot say with words. Jenny paints, driven by emotion.
Just as her work begins to gain more recognition she leaves with her husband to work as volunteers in Togo, West Africa. Living and working in close proximity to the native people, and joining in the numerous local ceremonies and festivities leaves its trace in the work that Jenny produces. Africa begins to increasingly influence the colour and content of her work. For some years now they work together with “Art for All” in projects for traumatised children. Drawing and painting with former child soldiers of Uganda also adds deeper emotional dimension at her work.
In the beginning the work could be defined as lyrical abstract but now all sorts of material begin to make an appearance in Jenny’s work. Old school notes, books, newspapers, music scores all find their way to the canvas. They are swiftly joined by scraps of cloth, sail fabric, lead and zinc. The use of such materials is not a purpose in itself, yet it allows Jenny to express her inner voice. The use of sober colour remains essential, yet the breath of Africa is also to be felt. The foreign light of an eminent sun and the red hues of the soil are never far away.

“The colours do not scream, tumble or collide with each other. Yet they do not avoid each other either. The quick-drying acrylic paint allows the application and interaction of several layers within a short time-span. This method controls and shares the intensity of colour. The layering of colours gives constant rise to a new colouration.” Fernand Bonneure
The rich symbolism of foreign ceremonies, the intrinsic value of minute details and her choice to depend on God, all leave their mark behind.
Jenny’s work is powerful yet also sensitive. It accuses no one but at the same time, one is asked to no longer remain blind to that which surrounds us.
Together with her husband, she lives in an old school building in a little village, Houtave near Bruges.
www.jennyverplanke.be

acrylics with a lot of other materials, mixed media
more paintings on here own site
www.jennyverplanke.be