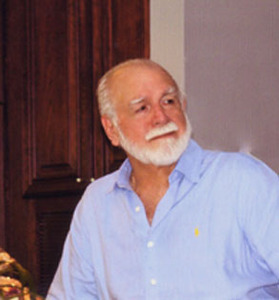 Agricultural Engineer, born in Cuba. His pastoral surroundings, contact with nature, artistic curiosity and the writings of Winston Churchill about art inspired him to venture into painting.
As a young man, he was a Cuban track and field champion and a medalist in the Central American Olmpic Games. After running many important agricultural operations in Cuba, he came exiled to the United States and began a succesful career as executive of multinational agrichemical companies, traveling for business extensively to Europe, Asia, Africa, Australia, Latin Ameruca and the Caribbean
He lives in Miami with his wife Rosa, their 7 daughters and 11 grandchildren. He has works and has exhibited in several US cities, Spain, Pueto Rico, the Philippines and L.America.
Never received formal art training studies, his development is the result of artistic curiosity, self studies and exposure to different culture in his extensive travels. His recent works reflect the influence, guidance and advise of his involvement with Cuban Master Baruj Salinas.