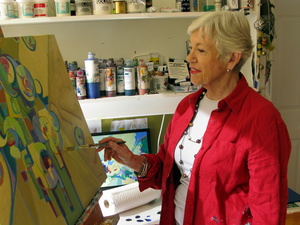 Born in Scotland, Zora immigrated to Canada in 1954. She obtained her BFA from University of Manitoba in 1977.

Zora first started, painting in water colour, and then in gouache. Chalk pastel was the next medium of choice followed by oils and now, for the last 15 years, acrylic.

Constantly striving for abstraction Zora’s subject matter has evolved until today you could say she is finally painting in a less representational way – almost abstract!

Zora is an active Charter Woman Member of The Arts and Letters Club of Toronto, having joined 27 years ago when women were first admitted. She is a past president of the Society of Canadian Artists (SCA) and an elected member of the Ontario Society of Artists (OSA).

Zora’s numerous solo exhibitions include two held in Edinburgh, Scotland, sponsored by the Institute of Chartered Accountants of Scotland. She was also invited to exhibit works in the First International Biennale of Fine Art in Arad, Romania and has exhibited in New York State, USA. She has also shown paintings in many group shows in Canada, where she has won awards.

Hot off the Easel

These paintings were all created in 2012.