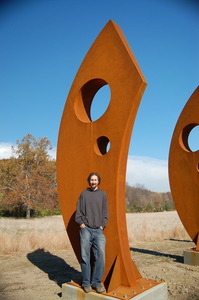 Thomas is an American artist born 1971. Currently living and working in Northern California.

Thomas has been working with metals for over 20 years.
Starting as an apprentice for an Indy car machine shop in high school. There he quickly started seeing much more than scraps in the left over pieces of steel. Building small sculptures from these scraps quickly gained him much admiration from the elder fabricators who had taken him under their wings.

After walking away from art to become a touring musician for a decade, Thomas returned to art with a mission. To turn the sketches he had been drawing on the road into reality.
Thomas opened his first studio in the historic Stutz arts and business center in Indianapolis.

While working there, Thomas gained the attention of many designers and architects that wanted him to do larger scale projects. He began working on architectural projects in upscale neighborhoods from Indianapolis to Chicago. In 2003, his work got the attention of a group in Los Angeles that was developing a T.V. series about art and building high-end furniture from old aircraft parts. Thomas was hired to be a supporting cast member/metal artist for Discovery Channel’s original series, “Wingnuts”. The series ran for the fall season of 2004 with 10 episodes. In Jan. of 05’ Discovery Channel asked Thomas to do an episode of “Monster House”. In April of 05’ Thomas was on television again. This time remodeling the famed “Cat Club” owned by Stray Cats drummer Slim Jim Phantom on Hollywood’s Sunset Strip.
A fitting job for a man who toured the United States for a decade.

Soon after the Discovery Channel work was finished, Thomas opened a studio in Los Angeles. Spending the next few years working on sculpture, and doing custom architectural work in fines homes from Laguna Beach to Malibu.

Thomas’ work has been collected across the United States, and shown in galleries and major art fairs in Los Angeles, Chicago, Indianapolis, Miami, New York and San Francisco.

With a love of geometric form, Thomas feels his work is rooted in balanced perspectives. Meaning, “To find a natural flow that is derived from the organized chaos that is geometric form”.
His attention to detail and perfection, are imbedded into his craft from the years as an apprentice. The work of Thomas Ramey is that of an artist who is dedicated to mastering his craft. From his choice of materials, to subject matter. Thomas embraces each piece with passion and excitement.
website, www.essentialsinsteel.com

This is a 20 foot tall by 86 foot wide commission from 2010. Installed at the Dehaan Sculpture Garden in Indianapolis Indiana.
Each individual piece is 18' tall in Cor-ten Steel.