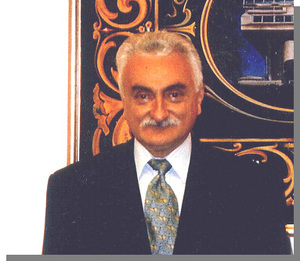 Born in Argentina in 1935, moved to Spain in 1978, to San Francisco, CA in 1983, Miami, FL in 1991 and Cypress, TX in 2006.
American citizen.
He graduated in Philosophy and Literature (Ph.D.) in Argentina. He also studied fine arts, including painting and ceramics, photography, art history, music, print making and journalism in Argentina, Italy, Spain and United States.
Currently director of the Museum of the Americas (Miami), a 501(c)(3) non profit organization, he is an expert in non profit policies. He helped other non profit organizations in many ways.
Involved in the fine arts for 50 years, he advised museums, galleries and art fairs as well as individual artists to get grants and scholarships.
Juror of more than 300 international events.

He was a professional photographer starting his own studio in 1961 in Buenos Aires (Argentina). Later he founded his own advertising and marketing agency.

He traveled America, Europe and part of Asia producing audiovisuals and films (commercials and artistic) including a series about great museums as well as the Louvre, Prado, National Gallery of Washington, Museum of Modern Art of Paris, Jeu de Paume (Museum of the Impressionists of Paris), etc.

He produced audiovisuals for several airlines including SAS and Lufthansa and 12 TV programs in Miami for the WLRN Channel 36 Miami-Dade County Television, called “Arte sin Barreras” (Art without borders).

Recognized in his country of origin, Argentina, as one of the most remarkable artist photographers, he restarted his artistic activity with a series of digital photos in 2003 exhibiting at the Latin American Art Museum (Series: “Black Jazz”, celebrating the Black History Month in February 2003), in Barcelona, Spain in July 2003 and in Crisolart Galleries in Barcelona (Spain) and Copenhagen (Denmark).
Juror of many national and international art events including the 2008 International Modern and Contemporary Biennial of the Latino Art Museum in Pomona, California and Member of the Admission Committee for the Manila International Art Fair in 2009.

He obtained his permanent residence in United States as a “Outstanding International Personality”.

Some artworks from my portfolio.

The unique building by Santiago Calatrava.

At the Guggenheim in the 60's.

Monastery in Tuscany (Italy) by night.

From the "Liquefy" series.