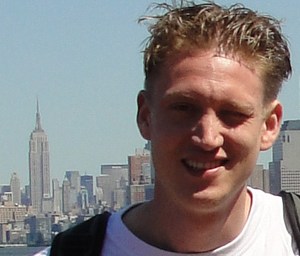 Tobias de Haan was born in 1980 in a Dutch city called Utrecht.
Utrecht the city Tobias grew up in had, with its medieval city center and huge church tower called the Dom Tower an enormous influence in the early artistic expressions of Tobias.
In the drawings he made as a child you could often find the city sky-line or famous buildings, not only from Utrecht but from all over the world.
After a short period at the art academy of Utrecht in 2001 he started painting as an autodidact.
He finished his first painting later that year: Amsterdam in the future.
A very surreal painting of Amsterdam in a distend future with modern buildings build around and above the old city center.
From the first painting of Tobias de Haan he used only one technique: Oil on canvas.
This because of the deep and intense colors and the possibility to paint in layers.
From 2002 Tobias also started to paint still-live paintings.
First he started to paint still-live paintings only to capture the technique required to make just a very realistic painting, but from the first still-live he completed a new passion for still-live painting was born.
In 2007 Tobias de Haan was invited at the Florance Biënale in Italy, a international art fair were more than 1200 artists participated, he received the fifth price in the category art painters.
From 2010 on Tobias de Haan collaborates with an other autodidactic surrealistic Dutch art painter: Peter Blom (PB) known as former hip-hop dj delic from the successful Dutch group Opgezwolle.
Besides solo exhibitions the two work together now by organizing duo-expositions.

“The Dom Tower of Utrecht”

“The Tower of Babel”

“Scull with Parchment and Canvas”