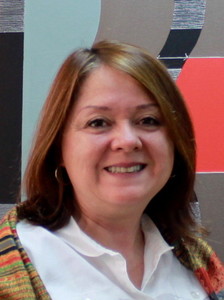 Born in Costa Rica, she graduated in 1995 with honors from the University of Costa Rica. She majored in Fine Arts with emphasis on “Painting”.

She was a founding member of the Costa Rican Association of Visual Artists, ACAV, she has been president for four years, and in 2012 completed her presidency. Now she is Honory President of ACAV.

Conceptual Definition of the work nodes: In programming, particularly in data structures, a node is an element of a linked list, a tree or a graph. Each node is a record structure or have multiple fields, and at least one of these fields will be a pointer or reference to other node so that a known node, starting from that reference, in theory be possible to access other nodes of the structure. The nodes are essential tools for building dynamic data structures.

I want to show in this portfolio some digital photographs I have exhibited in various art exhibitions. They are digital photos I have taken and then have intervened. I've printed it on canvas.

"I had the opportunity to photograph different corners of the house of a dear friend, and this space I loved it for its simplicity, with nostalgia and old air. Everything in perfect order even though the space is small, nothing is lacking and nothing is superfluous "

"I was impressed with this house in Barrio Amon, very humble, simple, but with a delicate beauty with a tree in the middle of the sidewalk, adorning its facade. This house should protect inside stories and testimonials from ancient times and now. "