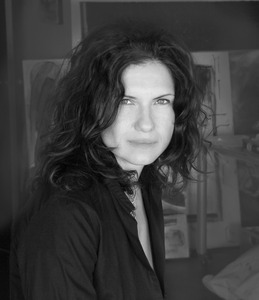 Rose Masterpol was born in New York, and currently resides in Los Angeles, California. She received a B.A. degree from CalArts in Art and Design. The versatility of her work can be attributed largely to her refusal to study only one style or medium of art. As a result, the work remains true to her own depth and defies easy classification, or a ‘signature style’ -- but is often compared with De kooning, Motherwell and Kline.

Although best known for her abstract expressionist paintings, Masterpol revives abstract surrealism and automatism in her new work. She utilizes the power of stroke, color and line, painting from nothing and allowing images to emerge, and reveal themselves. Being less analytical, exposing her internal dialogue through the process of free association, Masterpol unravels an abstract portrait of the moment, full of surprise and unexpected juxtapositions. She calls this liberation of imagination. She paints, builds, layers, lets the painting happen, and follows it. She calls the body of the painting the groundwork, the second layer the framework, and the third layer the depth of field. This also provides a hierarchy of the different forms as well as maintaining a dream-like quality. The work evokes the senses and provokes thought, and the viewer is caught in a trap of revealing imagery and emotion.

Masterpol’s work has been collected and commissioned for over 25 years. Her list of collectors includes celebrities such as Jane Lynch, Sela Ward, and Robert Gore Rifkind (Rifkind Foundation of LACMA). She has exhibited with Jane Seymour, Tony Bennett, and Sam Francis. Her work frequently appears in commercials such as American Express, Budweiser (superbowl 2012), Time Warner, Apple, and in the film “Oceans 13.” Masterpol continues to hold solo shows in the U.S., and has been featured in several prominent publications and galleries.