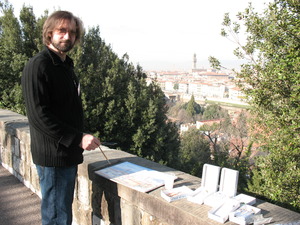 Piskarev Vladimir Viktorovich. Professional artist, member of the Artists' Union of Russia and Tatarstan Republic. He lives in Kazan, Tatarstan Republic, Russian Federation. Vladimir was born in Syzran, Russian Federation on 11,june 1962 year. He has two higher educations, graduated from the ?huvash State Institution of Educational Specialists in 1991 year.
From 1997 to 2000 year he has passed a full rate of the painter of the top skills in Creative workshops of painting of the Academy of arts of Russia.
Exhibition activity begins with participation in the Zone exhibition " the Greater Volga " In 1991, in which he was exposed during 1998-2004 years. (Kazan,N.Novgorod, Saransk)
He also regularly took part in current republican exhibitions in Exhibition Hall of The Artists' Union of Republic Tatarstan, and in the exhibitions which were organised by the State Art Museum Of Tatarstan Republic.
1998 - exhibition in palace of Yusupov.
2000 - " Classics and the present " in The central house of the artist. An exhibition with theatre of Tinchurin
2005 - A mobile Exhibition devoted to the 1000 anniversary of Kazan. Moscow (March 2005), St. Petersburg, Yaroslavl, Great Novgorod, Nizhni Novgorod, (June 2005).
2006 - A mobile Exhibition of Trainees of Creative masterful painting of the Russian Academy of arts. Saratov. Kazan.
2006 - " a Silent life " The central house of art workers?
2007 - An exhibition devoted to annual Session of Advice of managing directors of the International European Bank of Reconstruction and Development. National Art Center, Kazan.
2007 - " the Gold Palette " Saratov.
2007 - Symposium on painting. Vasilsursk.