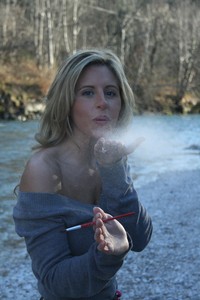 Lisa Burelli was born in Udine in Friuli Venezia Giulia September 25, 1981, and since childhood has shown dedication and passion for creativity. Graduate in Science, Nursing, is self-taught art in the world and is active participant in the international artistic life. Lisa Burelli has focused his artistic journey continues in search of "something" that goes far beyond the material and, with the use of living materials such as wood and stone dust associated with the bright colors, has set itself the objective of Always make the hull, and in continuous motion.

-She began his career in 2008 with an exhibition exhibition staff "Energa" at Artemisia Gallery - Udine;

-Part of the renowned group "A hundred and more artists joined the world" - Cerreto Laziale, chaired the Master Serpetri;

-January 2009: Participate in the project "Art in the Bank" - Exposure six months at three different sites of the BCC located on the territory of the Friuli Venezia Giulia;

-January 2009: Participate in the contest sponsored by "PittArt"-web-. Ranked among the top six artists;

-February 2009: Selected by Ms. Falzone (critical-historical art) for participation in an event thick in Rome "International Exhibition of Contemporary Art";

- April 2009: Winning National Competition "John Paul II" in the paint section with the work: "Woman-Mother Woman in God", was awarded an honorary diploma and medal winner and honorable mention to the work.

-June 2009: Join the group exhibition "From Matter to Sign" - Magnano in Riviera-Udine;

- November 2009: Join the Group Exhibition of Contemporary Art "The Second Book of Dreams: Ways of Escape" - CASTEL DELL'OVO - Hall of Prisons - NAPLES. Event Organized by the Academy of the compass with the patronage of the City of Naples.

- January 2010: Selected by "Editions phoneme" for the inclusion of works and biography of "Derutiana Art Catalogue";

-March 2010: Inclusion of six works in the Artist Gallery GHEOART;

-April 2010: Selected by the Organizing Committee to participate in the Florence Biennial 2011;

- July 2010: Publishing House "Dawn", founded in 1972 by Dr. Flavio Puviani, now directed by Dr.Roberto Puviani, publishes the 2nd edition of the CATALOG OF QUOTATIONS 2010-2011, by entering the artist with his work Burelli , "oneirically 1";

- September 2010: Participates in the exhibition "Artifact 2010 - Candy World" in Trieste at the Palace Gopcevich;

-July 2010: In July is selected by Houda Oueslati, Gallery at the UAE;

-October 2010 presents his works with a six-month exhibition at the Art Gallery Renowned "ItaliaPortray" - DUBAI - UAE;

- December 2010: Presents his works with a staff position at The Quarter-hotel-restaurant "The Riviera" - Magnano in Riviera; UDINE-

-December 2010: Is selected by Dr. Remo Allessandro Piperno for the inclusion of some works and biography on the text MDS - Master of Arts and the Century. CIDA Rome;

-January 2011: Is selected for participation in the Contest thick: "Golden Brush" in Dubai - UAE;

February 2011: Join the group exhibition "Not That There Are Just Me Here" - at the Visionary of Udine - Event Organized and Promoted by SPAC FVG;

June 2011 Selected for the third consecutive year by the Florence Biennale.

June 2012: MDS is published in the "Masters of Arts of the Century" No. 12 Ed Cidia with the work "Women for Women in God's Mother."

To dance .. I found myself among billions and billions of atoms .. I was there, among them, and only from there I could see the love, the love that comes from the smallest entity vibrating!
Fantastic colors, wonderful as long as I could see the atoms began to hug me and I cast them become ONE.

Parallel Worlds
Similar
Interpenetrating.
A scream of joy
A step beyond
The Finite

The works of Lisa Burelli not allow an immediate reading but only a 'thoughtful interpretation and, as it may seem absurd in what we consider the inviolable artistic gesture, measured with rational thought and conduct the proper meaning.
This does not necessarily mean losing the immediacy of visual pleasure, the perception of skin, this simply means that behind the apparent use of poor materials, recycled, re-discovered and re-adapted as paper, copper or plexiglass, etched, scratched and manipulated as in an instinctive gesture, there is a desire to formulate a thought long studied and understood.
The works of Lisa Burelli born after a 'careful study and an intentional application of the rules of Feng Shui and Colour Therapy.
So, as she writes, ... in addition to meeting the aesthetic pleasure can also be seen as instruments of well-being: the shapes, colors and materials used are specifically designed to harmonize the environments in which you live ....
If to this philosophical commitment and a layout designed to add that each work is accompanied by a thought thought post-creation, we understand the artistic energy of Lisa Burelli and we explain the pleasure and the stimulating effect of his works to our first look , this is hasty and impatient, caring and rational.
There is a brief introduction to the critical place to discourse on philosophy and studies of which we've all heard about in some way or that we applied in our personal life experiences, here is what you press to highlight his ability to interpret and its inspiration artistic approach immediately suggest what might be called visual pleasure but in critical care to examine and explain the content without forgetting the inputs of the creative process.
Everyone is obviously at the same time free to not listen or look for explanations to the phase of gestural Lisa ... to indulge in a personal interpretation of rational or irrational.
And 'the stimulus that counts ... would without doubt the artist! An incentive that even for a moment he gives us wellness of body and soul!

Born in Udine in 1981, Lisa Burelli moves on a path of great abstract expressive power is characterized by a succession of presses and addensazioni color and materials, which create a pleasant visual effect and contrasted. The first thing that strikes us is without doubt the coloring: bright colors and contrasting the works convey a message of joy and vitality positivity: gestures and matter come together in a pictorial space where forms and colors live together balancing each other.
The impression of dynamism is accentuated by the use of wood, stone dust, paper and other materials, including recycling, which, combined with the liveliness of the colors, enhance the feeling of "movement". Looking at his works in the artist we see a desire for dialogue with the viewer: the author interacts transmitting the message of his art, stimulating thoughts and reactions in the viewer: in addition to the aesthetic that represents a first level of reading, Lisa Burelli us speaks in his work a sense of serenity and joy: the painting becomes almost a therapy to spread a positive message through a universal language of signs and colors, an invitation to look at life and the future with renewed hope. A repeated message with energy and conviction.

.. "The search expression is particularly striking, are images that communicate beyond the visible through a subliminal language .."

Lisa Burelli, produces 'art' without limiting the use of 'average' and going back to a space / time he sees physically realize the old 'tricks' used by the masters of the past.
His is an 'art' of 'putting together', the composition without preventing 'message' and 'context of living'.
Lisa works which arise as a search for a time 'evolved' and 'past'.
The 'future' is released as notes affixed to a score, it looks as if the artist is able to apply its objects in growing media materials.

Lisa Burelli, focus and goal of the entire exhibition

.. I happened to see his works that I find interesting and what to whom, in my opinion clearly emerges, even if the true passion for art, a 'great talent, the rest of a good technical background.

I think it highly important .. your work and your style ..
They are very beautiful .. its modern abstract works, complimented his originality.

His works breathe a cosmic energy shaped by a technique that
uses different materials to create harmonies sublime. Each composition
trace the boundary of the unconscious and the magnet material in any form
pictorial dynamism, creating effects of rare beauty. The sign becomes
light in the corridors of the mind, leaving areas of shadow that dilate
in explosions of color and spark the imagination. Within its
paintings you feel a little melancholy.
He leads us through the labyrinths of the mind ... chasing dreams.

The artist Lisa Burelli arises as the fundamental problem, that of returning an interior space plausibly, necessary and true. And it is natural to use a language that has progressively thinner, purified, expanded, so that today, an increasingly large opening speech, a free hand and evocative.
Every limit falls, but never to obey the image or disposes of anarchy, the automation of composition.
The eye of Lisa Burelli is the reason, is his method is to a principle of order, as the supreme freedom, which coincides with the need for symbolic image.

I got to see some of his work on the internet, study your site and appreciate your research.
Allow me to write to compliment the verve that I read in every good work and for showing sensitivity towards the nuances. A special appreciation goes to the calibrated color choice that faces, brilliant and charming together as there is in the works 'going to', 'opening', 'river', 'dreaming of the sun' and many more.
I would like to propose a collaboration with our staff.

I had the opportunity to visit personally and admire his works through internet.Sono fascinated by his creativity and his art, for example the work "Awakening" is truly unique. Sincere compliments.

The material on the horizon, and poetry blend of artistic vision, double-sided, where coexist different materials: from dust to the colors and everything goes to .. to vibrate in an imaginative and elusive reality. Works that do not offer an immediate but thoughtful reading of and behind the mere appearance of a readjustment is added to the stimulant effects of meditation.
Prof. Claus Zaccuri

Thank you .. for his work, which is certainly evidence of a very special talent, and sensitivity of a composition very rare ...
Sandro Serrafico-art critic - editor

They talked about LISA Burelli: