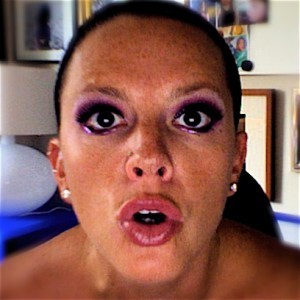 Justine Elizabeth Fernie was born in Toronto, Ontario on Christmas Day, 1970. One of four children born to very artistic parents, Justine and her siblings grew up in the west end of Toronto.

Justine graduated with a degree in Honours Visual Arts from the University of Western Ontario in 1993.
Justine spent the following year living in the south of France, visiting and seeing in person the artwork
she had studied intensely in school. Her favourite and most inspirational teacher at UWO was David Magee, who tragically, passed away in 2004. David taught Justine to see the magic in faces and bodies that were not “normal”. Her printmaking professor, Helmet Becker commented that she was definitely a “colour” girl.

After successfully pursuing a career in package design and working for several high end packaged goods design firms in the capacity of production manager, Justine left the field in 1999 shortly after her marriage to Sean Fernie.

Spurred on by her local community, Justine began creating custom portraiture for several of her friends. Since the spring of 2006, Justine has completed upwards of 300 custom portraits, ranging from family portrait compositions to cars to cottages and farms.

Beginning in the spring of 2008, Justine began painting abstract works in her typical colour palette. This new direction has been met with great enthusiasm from her clientele. It is a style which is continuing to evolve with endless possibilities.

In 2009, Justine embarked on a brand new series of large scale portraits of figures of present day pop culture. Oh Bama and My Sarah (Palin) were both shipped to Infusion Gallery in Los Angeles to take part in a group show for the month of June 2009. Over 350 people attended the opening of the show which gave Justine’s work a great opportunity to be showcased to a brand new audience. Directly as a result of the show in Los Angeles, Justine was contacted by an art dealer based in Italy and was invited to show in a castle in Italy in the fall of 2009. Due to previous committments, this show was not a option this year, but perhaps sometime in the future.

On September 22, 2009, Justine took part of the first ever “Art Beyond Walls” pop-up gallery at The Berkeley/Field Room in Toronto, Ontario. This brand new venture was hosted by The Village Gallery (Port Credit, Ontario) who currently represents Justine’s work in the Toronto area. This innovative urban pop-up gallery brought together three emerging Canadian artists for an evening of fabulous art, live music, scrumptious bites, groovy cocktails and exceptional people.