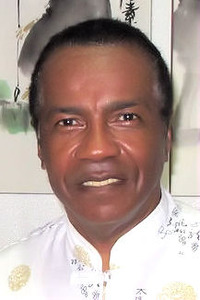 (1945-). Born in Harlem, New York City, Teamoh showed an aptitude for art from an early age since he was seven years old, and knew he wanted to be an artist. His first grade teacher admired his art talent and was an influence that opened his mind and knowledge toward an artistic destiny. During his early teen years he was familiar with different cultures and art history, spending hours at the public library and visiting art museums. Teamoh studied African folk art, Chinese landscapes, Western classic drawing and painting styles with well known artist's friends of the family at their Harlem studios. After years of self study his formal training began when he was accepted to the prestigious Art & Design high school majoring in architecture design and photography. After graduation in 1965 due to the draft he enlisted in the Air Force the same year. After discharge in 1969 he worked as a freelance graphic artist and attended night classes at the Art Students league studio workshops in figure drawing and painting. He was introduced to Romare Bearden a famous Harlem black collage artist, who lectured him further developing his composition skills.

In 1971 he was accepted at the School of Visual Arts fine arts degree program, and studied under renowned artists of the 1970s such as: Gilbert Stone, Larry Zox, Jack Youngerman, Frank Roth and Jay Rosenblum. After two years studying the Italian renaissance and Dutch masters he was drawn to European modern Abstract Expressionism, and explored the realism in relation to abstract implications of color coming together in various art mediums. He decided to pursue the American post-modern hard edge and color field movement as his foundation to his painting style for future creative expression. The influence of Mondrian, Cezanne, Kandinsky and other master's of simplified form inspired his paintings to express bold limited color and shapes that characterize his mature work. "My work expresses not the ordinary subject as an interest as much as the perception of the subject."

A practicing full time artist Teamoh is a multimedia and versatile painter who works in oil, acrylics, watercolor, pastels and Chinese inks. (He also creates digital art images with photography, because it is an ideal way to get at the directness he desires from art.) His work is primarily abstract expressionism, with a diversity of styles chosen as a strong expression in painting and photo art compositions. "I agree with other famous artists, the traditional idea that an artist should express one medium or style is against self-creative and artistic freedom which goes beyond limitations." Further
acquaintance with Teamoh unique biography and the sources of inspirations behind his oeuvre reveal an artist who has deftly marshaled passion, intellectual rigor and solid technique to create a genuinely original body of works. His experience in the field led to the development of his signature theme: vision. Dedicated and persistent experimentation he has develop techniques as a vehicle for creative expression with a real focus for viewers to share an expanding scale of
sensibility.

Teamoh participated in many art exhibitions and gallery group shows in New York City, Florida, Canada and Beijing China from 1971 to the present. He has received many first place painting and photography awards during 2002 to 2005 in the U.S. Notable collectors of his work both nationally and internationally have expressed his strong creative uniqueness; an original form of works ranging from beautiful, gifted and excellent. Teamoh states: "Selling my work is never
a motivation to create, sharing my art and recognition is my inspiration and goal. His first solo art show was held in 2010 and he was the first American artist to exhibit in Chongqing City sponsored by the Ministry of Cultural Affairs. He received good reviews in three professional Chinese art and photography publications as a highlight to his career and future creative development. He resides permanently in Chongqing City
since 2007.

These art works are a small partof my constant change of visual expressions and energy. A vibrant and endless discovery of colors, forms and shapes creating emotions of fascination.