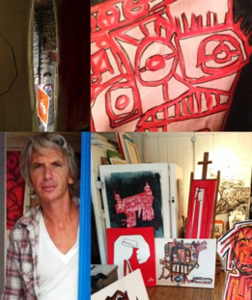 Jean-François Riffaud was born near Paris in 1969.
He spent his childhood in the centre of France, in particular in a three barns and one church remote hamlet surrounded by fields, cows and wild landscapes. This place is still the most important creation cell for his work. His studio is set up there, hidden in an old barn.
Riffaud moved to Paris in 1987, where he lives ever since.
In 1995, after finishing his studies, he moved to Beirut (Lebanon) for two years where he started to paint. This town trying to be reborn, its lights and the antique secrets of the Middle East certainly hit him strong and participated to the start of his works.
Already in his early works the contemplator is captivated by his capability to express the fight between ambivalent forces.
After moving back to Paris Riffaud started to work for different humanitarian organizations and the Red Cross, but he never gave up painting, which always, since Beirut remained a most significant part of his life.
“Even though it is not obvious to those who solely see what I show, painting is of critical importance to me, as paintings are my only genuine expression”.
Throughout his complex work Riffaud focuses on expressing the human condition and its permanent personal and intimate combat. He creates lost, helpless, 'static fighters'; obvious in some paintings, less in others. The humanity of his characters starts in the eyes of the beholder.
Riffaud is mainly painting in his barn but also in his Parisian studio. For his creative process it is fundamental to use simple, basic materials and to prepare everything his way. He cuts and stretches the canvas himself and utilizes nearly nothing else but the 3 primary colours, orange and black. Framing the paintings is the final formal act; all that happens before and after escapes his control.