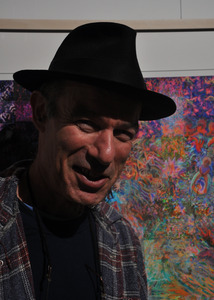 In this exhibition of ‘photo composites’ Nussinov has also drawn from his own stock library of hundreds of images. He has assembled them digitally, to create imaginary scenes of life within the urban and natural environment. Working with hand drawing techniques and computer digital technologies a composite artwork is created, that is both atmospheric and evocative, elusive as to whether it is a photograph, a print or a painting.
The connections are both subliminal and real. Time shifts through the composites revealing the artist’s life at the same time as the community around him.

Named ‘Between the Layers’, the works present a world of ambiguity, transience and illusion, of recognised and abstracted scenes embedded in perspectives, to illustrate different relationships. At all times the viewer is challenged to unfold the mystery, to explore and discover.