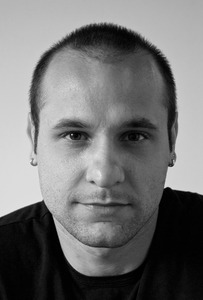 Aris Baraboutis was born in Athens in 1978.

In 2011 he received his Master course in Visual Arts & Photography at the LABA (Liberal Academy of Fine Arts) of Florence. In 2005 he graduated with distinction in Fine Arts from the Academy of Fine Arts of Bologna in Italy. He studied in theatre and cinema, costume design, theory of art, and cultural anthropology.

His work is characterized by the alternating use of painting and digital images. In 2006 he had his first solo exhibition at ‘’Babel’’ gallery in Athens. Since 2002 he has taken part in group exhibitions, in Greece and abroad, such as the exhibition ‘’Art for Art’’ at the Melina Mercouri Cultural Centre, in Athens, 2008 and at the Tannaz gallery in Florence, Italy, 2011. He has presented his work in international biennales and festivals, such as the XIV Interbifer Tuzla International Biennial festival in Bosnia Herzegovina, 2011, the ”Arezzo&Fotografia” festival at Arezzo, Italy, 2011, the ’Labyrinths” exhibition in the framework of the Cultural Year of Greece in China during the Beijing Olympic Year 2008 (at the 798 art space) in Beijing, and the International Comics Festivals 2006 and 2009, in Athens, Greece.

“The loneliness of a pot”