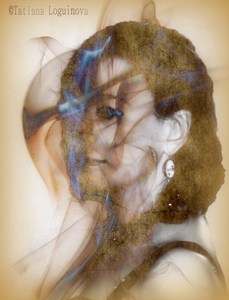 fusion of music & visual art
www.tatianaloguinova.com
Tatiana Loguinova started her music education in Moscow at the age of five.

She gave her first solo recital in Moscow at the age of 15. Graduating from the Gnessin State Musical Conservatory, she qualified as a ‘Concert Pianist’ and obtained her Master’s degree summa cum laude for piano, chamber music and music
pedagogy.
While still a student, she participated in youth music festivals in Russia, gave piano lessons and coached opera singers at the Gnessin State Musical College. With the Baroque chamber music group Galliarda, which she founded in the 1990s and in which she played the harpsichord, she performed in
Russia and the Baltic republics. Several performances by Gaillarda were broadcasted by Radio Mayak (Moscow).
Tatiana moved to Belgium to study the harpsichord and the pianoforte with professor John Whitelaw at the Ghent Royal Conservatory, and obtained her master’s degree for both instruments.
Subsequently, to improve her harpsichord and pianoforte techniques, she took lessons with professor Kenneth Gilbert in Salzburg and with Davitt Moroney in Paris.

Tatiana's first solo CD 'Music at the Russian Court in the 18th & 19th Centuries"/ "Phaedra Classics" 292009 - first step in unique recording project-was chosen by Radio Klara as the best CD of the week.
Her second solo album M. Glinka "Treasures for the Pianoforte",the world first recording of Glinka's piano works on historic instrument, has been launched by "Phaedra Classics" in Februari 2012.
This release keeps recieving international succes and has been featured and broadcasted already by the main Classic Radio stations in EU,US,AU & highlighed and awarded by importantEU Music Magazines.
http://www.phaedracd.com/product_info.php?products_id=151

Tatiana's other artistic site is photography. Despite of being busy with visual art for a few years only,she starts recieving international recognition & appreciation already.

"Yin & Yang"- struggle for the harmony

“Contradictions of the Harmony”

...As iron is eaten by rust, so are the envious consumed by envy...