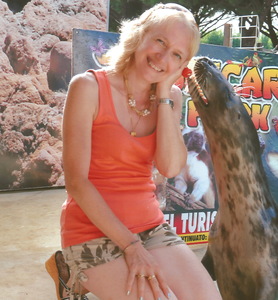 Coruzzi Marina born in Turin (Italy) March 23, 1962. Since the age of ten years she began to love and experience the painting, although her studies moved her away from this passion, which is still remained vivid in her. In 1997 he attended a course of painting in which she experienced new techniques using leaves. This is a method that has ancient origins, nowadays used primarily in the East: in Japan is known the work of Kazuo Akasaki, in China the group Nature's Art affects the surface of the leaves to design subjects and representations. But the style in which it is received Marina Coruzzi is entirely personal; the education received enabled her to appreciate a particular and fascinating use of natural materials, at the same time her inner sensitivity enabled her to communicate the intensity of her "secret world", refining the technique to be defined as "mosaic artist". She considers herself an artist researcher: in this way she is able to use not only leaves, but other natural elements, like flower petals, bark, garlic peel, and many other elements, the essence of which gives a vital aura to her works. She also conceives fascinating forms, characterized by a third dimension, a unique experience for those who use this delicate and sophisticated technique.

June 22th to July 14th , 2013 – Exhibition at “Montebenedetto Charterhouse”, within the natural park Orsiera-Rocciavré, in Villar Focchiardo (Turin), in collaboration with Gruppo Cartusia.

Mosaics with leaves and petals

Nature mixed with fragments of leaves and petals in partial three-dimensionality.

“The woodland fairy - Mosaic with leaves and petals ”

“The Wolf - Mosaic with leaves and petals”

“The woman tree - Mosaics with leaves and petals”

“The look of Nature”

Mosaic with leaves and petals