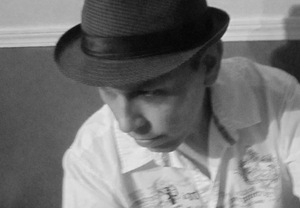 I enjoy painting Abstract Art that I have merged together with Traditional Native American Art.
http://fagnangallery.weebly.com/

Abstract art uses a visual language of form, color and line to create a composition which may exist with a degree of independence from visual references in the world.

We are all interconnected by a universal conciousness. My native culture teaches that this world we live in is but a shadow or reflection of the other larger spiritual world. I think we all have a shared connection to this spiritual energy and because of that we are all part of a larger consciousness.
George Fagnan

Total abstraction bears no trace of any reference to anything recognizable. In geometric abstraction, for instance, one is unlikely to find references to naturalistic entities. Figurative art and total abstraction are almost mutually exclusive. But figurative and representational (or realistic) art often contains partial abstraction.

I want the observers to have their own personnel reactions to the work. You may have a certain feel for colors or the atmosphere of the work. It may bring back a certain emotional response such as happiness or sadness. It may remind you of a time or place in the past. I feel by placing a title on the piece it places certain limits or restraints on what it could mean to different people and sometimes it takes some time and reflection but eventually the painting will speak to you in some way.

Crazy Horse (Lakota), literally "His-Horse-Is-Crazy" or "His-Horse-Is-Spirited" - September 5, 1877) was a Native American war leader of the Oglala Lakota. He took up arms against the U.S. Federal government to fight against encroachments on the territories and way of life of the Lakota people, including leading a war party at the Battle of the Little Bighorn in June 1876. After surrendering to U.S. troops under General Crook in 1877, Crazy Horse was fatally wounded by a military guard while allegedly resisting imprisonment at Camp Robinson in present-day Nebraska. He ranks among the most notable and iconic of Native American tribal members.

Painted in a semi-abstract style, I wanted to convey the family oriented side of the man known as Crazy Horse. To represent his marriage I painted two broaches, hanging inside his tepee. His horse is returning alone for the last time. Crazy horse held a prestigious place in native history, historically and spiritually. His life as a family man is often overlooked and I think all people, especially those who have worked in the military, can relate to how he should be viewed. Not just as this brave warrior but as man with family and a concerned leader of his community. I wanted to capture the essence of not only his character but to visually express his visionary side.