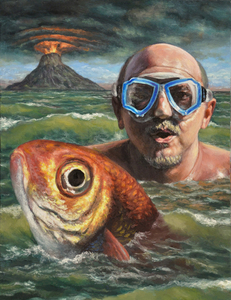 Painter and sculptor, Marco Rossati was born at Reggio Emilia (Italy). He studied at the “Istituto d’Arte” and at the “Accademia di Belle Arti” in Rome with Mino Maccari, Renato Guttuso, Franco Gentilini, Ferdinando Bologna. He later taught at the same Accademy.
Exponent of the Italian groups (Postmoderno, Arte Colta, Citazionisti, Nuova Maniera…) that, beginning from the end of the "seventies", actively recuperate forms and themes of the art of '500 and '600, opening the way to a kind of painting which later had to become fashionable all over the world. His works are in the main Italian collections and Museums. He has executed paintings and sculptures of large dimensions in public and private buildings.
He collaborates as a critic with several newspapers and magazines. He publishes as poet and writer.
He is Director of the “Scuola di Pittura Scienza dell’Arte” of Rome and President of “Unione Artisti”.
In 2004 he was awarded the “Tarquinia-Cardarelli International Prize” 2004.

FOREWORD TO
MARCO ROSSATI’S EXHIBITION: “THE SEA, UNLESS EXCEPTIONS”

"... Rossati is an artist who has learned from the twentieth century a concreteness of language, from a long time fiercely opposed by those who continues to distinguish the twentieth century’s history of art between ‘avant-garde’ and ‘tradition’.
Now, exceeded the threshold of the new millennium, this dialectic increasingly takes on a very different character, much more interconnected and much freer than the many conceptual cages of the past.
Rossati is a free spirit who follows his inspiration and nothing concedes to the lure of easy effect, but his figurative world, globally meant, is one of the most fascinating, delicate and magical lands on which the observer can move taking constant cues and continuous suggestions arising from the high quality and the deep ethics of this artist...".