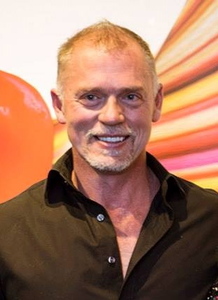 KarlGustav was born in 1964 in Kroonstad (Freestate, South Africa) and lives and works in Johannesburg (Gauteng), South Africa. KarlGustav started using a graphic tablet with infrared pen, personal computer and photo-manipulation software to create unique once-off images on either canvas, PVC, perspex or plexiglass. These pieces of art are then framed, exhibited and sold.

In answering the question about his choice of tools, KarlGustav refers to the philosopher Roger Scruton’s view on originality in art: “ Originality is not an attempt to capture attention come what may, or to shock or disturb in order to shut out competition from the world. The most original works of art may be a genial application of a well known vocabulary… What makes them original is not their defiance of a past or rude assaults on settled expectations, but the elements of surprise with which they invest the forms and repertoire of a tradition.

Without tradition, originality cannot exist for it is only against a tradition that it becomes perceivable.” In this context the artist is purified to honest expression. Becoming informed in this age is an attempt to synchronise our own heads with the reality outside. Our thoughts and experiences are directed by our access to information. In our use of technologies such as the INTERNET we are all authors, publishers, and producers. Our freedom of expression is as good as total and our potential audience is limitless. It is against this backdrop and in this dynamic living environment that KarlGustav finds expression in his art. Being aware of the immense duality of being born and bred in the age of apartheid as Calvinistic Afrikaner, and living on the other side of the spectrum in a modern digital age of the information revolution. It is therefore important to find a balance within this duality of conservatism and informationalism.

?The zen philosophy believes that only by stepping outside of logic can one make the leap to enlightenment. (2) Now let me explain myself: I am not sure I know what ZEN is. Zen koans are a central part of Zen study. It consists of a story, dialogue, question or statement, the meaning of which cannot be understood by rational thinking but may be accessible through intuition or lateral thinking. In other words, these kaons are supposed to be “triggers” which, though they do not contain enough information in themselves to impart enlightenment, may possibly be sufficient to unlock the mechanism inside ones mind that lead to enlightenment.

?Words and truths are incompatible, or at least, no word can capture the truth. (3) The work of M.C.Escher proves to be relevant in this respect.

To quote Christina Paul: “Digital technology has revolutionised the way we produce and experience art today. Not only have traditional forms of art such as printing, painting, photography and sculpture been transformed by digital techniques and media, but entire new forms have emerged as recognised artistic practices, collected by major museums, institutions and private collectors the world over.”

QUAERENDO INVENIETIS, (by seeking you will discover) leaves you with the essence of KarlGustav’s work in the sense of an ever present duality and sometimes incompleteness, as art is per se.