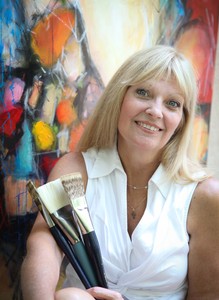 About The Artist
Deborah was born and raised in Cleveland, Ohio and migrated to Charleston, SC as a young adult where she attended the College of Charleston and developed her passion for art. Her work is influenced by the pioneers of the modern art movement of the nineteenth century and by today's Pop music. She approaches each new work with a vision of color that is intended to produce a poetic relationship to both the compositions and music that inspired each new work. According to Deborah, it is first and foremost about the color, it needs to be visually pleasing, disturbing, happy or peaceful, but it should not leave you empty. Her feeling is that you should be drawn into each work and therefore you become part of it. Deborah's work is displayed in private collections and Commercial Establishments across the United States.
I believe art is a compilation of our conscience and unconscious mind. It is what we experience in our everyday lives and what we dream of at night. It is how we touch reality and how we lose ourselves to our imaginations. Sometimes I see art in a face, or the sky or in a cloud. Sometimes I see a group of shapes, colors or buildings..............and sometimes I dream.”
Favorite Quote:
Paul Klee said “Art does not reproduce the visible; rather, it makes it visible."