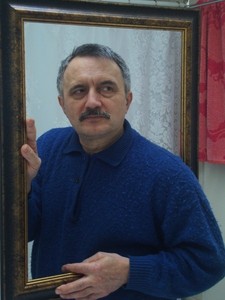 I am a self taught artist who had a passion to study and observe old artists. At the early age of thirteen my passion for the art has begun. In my my former country,I was art member of the local arts groups. I exhibited at many group exhibitions and have received awards.

“Tribute to the Caravaggio”

“Titanic on the safety Dock”

One day, I came up with the idea to paint the Titanic because of the of approaching 100 years anniversary. I made a few sketches of the Titanic before the final decisions for the image.

In my story the Titanic does not sink ,I went with a fantasy where the people and the ship are safe. Titanic arrived at the safe dock ,the safety dock is represented by my frame.
The next morning Titanic on my picture is on the safety dock, the people are walking some are still sleeping as you can see by the lights.

Unfortunately it did not happen like this, we all know the tragic story. So I painted the roses in the sea ,as a memory to the tragic event which happened on April 15th 1912th