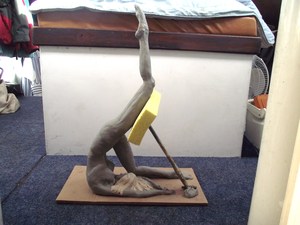 RE Siatkowski studied sculpture at Cornell University under the stewardship of Victor Colby. He then went on to graduate work where he studied human anatomy at the Harvard Medical School. He was mentored by CFA Moorrees and the craniofacial anomalies team of Joseph Murray (1990 Nobel Laruate in Medicine) and Lenard Swanson as well as the maxillo-facial team of Walter Guralnick, all at Harvard affiliated hospitals. His professional career in the USA involved living sculptural service performing planning of reconstructions for patients with congenital craniofacial anomalies with teams at the University of Connecticut, West Virginia University, and Vanderbilt University. Upon emigrating to New Zealand, he returned to sculpture with inantimate media. He produces works beginning with plasticene modelling, molding with polyurethane, and casting with polyurethane resins, usually in editions of twelve. His inspiration is the flowing female form placed in the context of his concerns for humanity and the human condition in planetary well-being.

RE Siatkowski works in Plasticene, molds with polyurethane and casts in polyurethane resin usually in runs of twelve. He lives aboard and works on his boat. His 2013-14 series are female figures mounted on simulated scallop shells on rotating bases with outside dimensions of about 16" X 14" X 16".