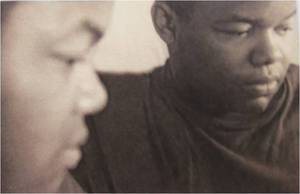 Artist Statement:
I was born in Port-au-Prince, Haiti in 1967. I began teaching myself to paint at the early age of eight after visiting Port-au-Prince’s Centre d’ Art. I was moved by the artists I saw, who seemed so happy as they wielded their paint brushes. Their work was largely based on Haitian legend, such as stories of the voodoo god Legba, or Tezin the talking fish. Some of their work featured historical subjects, depicting the Haitian revolution, slaves in battle with Napoleon's army, or silhouettes of famous Haitian leaders such as Henry Christophe and Toussaint Louverture.Having come to the United States at the age of 14, my own work is inspired and heavily influenced by the colorful, eye-catching style of those artists I watched in my childhood, but my themes are drawn from my own life experience and observations, primarily in large American cities: Brooklyn, Philadelphia, Los Angeles, and—most of all—San Francisco, where I reside today.My paintings are also informed by the books I read. For example, I have dedicated a series of paintings to the extraordinarily compelling work of the great James Baldwin. Literature lives deep in my psyche. When I was a child in Haiti, my grandmother was one of the head chefs at the Grand Hotel in Port-au-Prince, which was owned by the famous British writer Graham Greene. The eminent spiritual novelist Herman Hesse once remarked that the best art is born out of necessity, and these words speak for me. A sense of urgency drives my work—a passionate need to convey my view of the world and the color of my experience. When I am painting, I feel peaceful, serene, exhilarated, because I know I am doing the work that I am meant to do.The passion that radiates so powerfully from the paintings and photographs of Henri Cartier-Bresson, Miro, Henri Darger and Joseph Yoakum inspires me tremendously. Although you will not perceive a stylistic resemblance between my paintings and those of the aforementioned artists, I feel a spirit connection with them and their amazing sensibilities. I also feel a strong affinity for Outsider Art, and perhaps my work falls under that rubric.