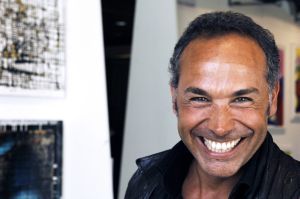 The art of Marco Antonio Abbagnara can be considered as an informal art or a mere provocation. The tortures, worries, vices and difficulties of human life spontaneously and freely reveal themselves to man even when they violently appear. Behind those lines full of colour is a deep meditation and technical study, which is not the artist’s instinct but his reflection, not a chromatic exhibition of his work but a careful research of its effects, not the stereotypes of the things but their accurate innovation. Even the materials used by the artist are very important, thus becoming the real protagonists of his works. Any kind of the materials he uses then changes into a piece of art: road signs, razor blades, wigs, silver papers, tablet boxes, one television, brainpan radiography plates, coke cans, dolls… assume, on the whole of the opera, the aspect of a finished work also delineated by the always explicative and communicative titles given by the artist to his creations. What is perceived by the eye is reflected to the brain and as if by magic the brain of the visitor becomes the final end of a message that represents everything of our society: the good and the evil, the show and the exaltation, the present and the past times, melted all together in an amalgam of the various aspects of life and reality.

Marco Antonio is, as he himself loves to define, an “untiring traveller”; his iron plates, his canvases and road signs are used to represent his mental change. As a matter of fact they are the final product of his personal reflections and feelings which the artist has reached after being constantly inspired by every corner of the world which he himself visits and explores. He stayed in the USA, South America, Africa and finally in Australia where in Sydney he attended an art-school course organized by the Local Institution for the Promotion of Artistic Industry which helped him to improve his artistic knowledge and better his technical skills. The artist emphasizes the colours in his paintings by giving a great touch of brightness to them ( yellow and red are as a matter of fact the prevailing colours ) thus indissolubly recalling his symbolic and experimental vision of life. It is often the human brain to play the lord and master in the operas. A superior brain, adapted to the most various and unexpected situations, carries a series of things and objects which pierce, frighten and torture the artist’s heart. The brain, in spite of everything, is always the main object of the canvases and it becomes a useful warning to the humanity: an unusual enlarged and deformed structure, a new primordial cerebral structure which shows itself to the present days. The idea of the “containing skull” brings us to think about the structure of the modern life where men are guided and tuned in a dreadful hyper-reality which is now sick of many data input and constantly overexposed to a lot of information and images. An ordinary human skull could not keep and save all these data any longer and that is why, in a not too far away reality, we come to a “Super Skull” as an expression and identity of the new homo sapiens. So the evolution turns the usual brain case into a more efficient, receptive and capacious room.

The new homo acts and optimizes the reality by means of the head, the crux of the body, now capable of keeping more and more data input and more and more unlimited information, thus banishing the rest of the body to an inert and weak mass, fitted to the lymphatic sustenance only. So here are his iron monolithes where imaginary doors open to a different dimension, old but futuristic at the same time. The artist, indeed, warns the men of their lives and of what is all round about thanks to his works which are deeply real and tangible. The works reveal what is superfluous in the present culture where everything is possible thus impressing the firm sentence of a sterile modernity promoting false values. The artist, however, does not stop at this sentence, but reveals a message of hope in order to protect ourselves from time which wraps the good and silly things up in one blanket where the convictions of deep thoughts raises as a magic shield to defend the artist’s own feelings so that one day he will not forget, but he will be ready to fight and finally to rise again

marco hasn't uploaded any images yet. Please check back soon!