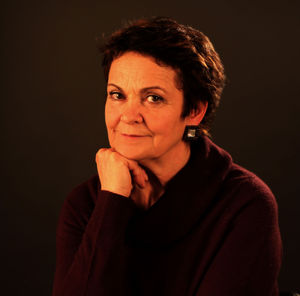 Emmanuelle Vroelant,
a family history marked by art
and thwarted by life.
Emmanuelle Vroelant was born into a family whose artistic aspirations were often frustrated by life.
Her grandmother, who was born in 1900 and who walked across France twice during the two world wars, witnessed the first developments of photography.
She immediately took to this new means of expression, and developed her own photos. But being a married woman at the beginning of the 20th century prevented her from doing anything more than taking photos as a family hobby, which she regretted her whole life. She bought her last camera at the age of 99.

Emmanuelle’s father started out as a film producer, but he was forced to give this up at the outset of World War II, and then with 6 children to bring up he had to find a stable, lucrative job.
He could finally devote himself to his passion for art, especially for Michelangelo, when he retired, and he was fortunate enough to take part in the works of development in the Louvre'cinémathèque.
In spite of this, perhaps unconsciously in his mind, his oldest child had to have a stable, productive life. That is how Emmanuelle, being the oldest of the six children, was expected to pursue higher studies, classical dancing being her sole artistic outlet despite her artistic calling.

Emmanuelle graduated in psychology at the age of 23, and then, with her companion, went off to discover the world: the fierce pride of Afghanistan, the majesty of India, the sense of beauty in Japan, the tranquil strength of the Pacific…

After the birth of their first child, Laure Gwendolyn Seisma, conceived on the Third Sea on board Harold Stevens’ beautiful schooner, they set up home in Vanuatu. This is where Emmanuelle would find her own inspiration, in a calm, tranquil environment far from any outside influences or family burdens.

Her meeting with Juan Roderta, a former monk, winner of the Prix de Rome, who was also travelling around the world accompanied by the writer-journalist Alphonso Colondro, finally triggered a reaction.
These two men stayed with the couple and their child for several weeks during which time Juan Roderta did a great number of sketches and gouaches.

Thanks to him, Emmanuelle Vroelant became aware of her own urge to paint. Watercolours, being the sole material available in the only shop on the island of Santo, taught her how to be accurate with her first brush strokes, and she derived tremendous satisfaction at being able at last to express her hitherto hidden desire to paint.

But it soon became necessary to find a richer cultural environment, and the family set off for Europe where their second child, Erwan Siddhârta was born.
In 1981 Emmanuelle Vroelant opened her first workshop near Paris. After a few exhibitions, the Grand Palais exhibited her work in the Salon des Indépendants in 1985,86,87 and 88.
Once her reputation was made, she received many orders. Her first international exhibition opened in Abidjan under the patronage of the then Minister of Culture, Bernard Dadié.
This proved to be a great success, but then tragedy struck. Emmanuelle Vroelant fell seriously ill and for two years she had to battle for her life...

In 1992 her diagnosis was still deferred. She started to enjoy life again but felt too listless and lacked the energy to continue painting.
She returned to her studies and opened a psychoanalysis practice. The only link with painting came through her therapy work.

Emmanuelle Vroelant gradually recuperated her driving force and her interior energy, and began to feel the urge to start up painting again. In 2005, with her children grown up, and once again at peace with herself, she and her companion left Paris and her work as psychoanalyst and settled in Brittany, where she felt transcended by the constantly changing light.

In 2009 she successfully exhibited her work in Paris at the request of the art collector Michel Chamming’s.

In 2010 she exhibited in New York for the inauguration of a gallery in Soho, and met Jean-Claude Reumont, who suggested representing her in China.

Emmanuelle’s work is now permanently exhibited in China and in the United States, and she holds a personal exhibition in Paris once every two years.

Just a few pictures on my actual work

“Silent of the low tide”