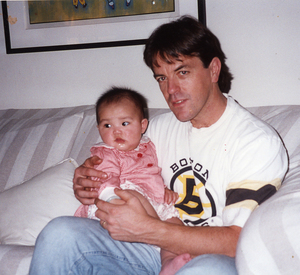 About
Born in 1953, Robert Welsh grew up in Brighton, a working-class neighborhood in Boston during the 1960s. As a young man, he traveled extensively in Europe and the Middle East and it was during that time that his passion for photography was ignited. A self-taught photographer, Robert uses an early 1950’s twin lens Yashica camera with a 2-1/4” square negative and is a master of traditional black-and-white and color printing.

In 1989 Robert moved to San Francisco. He is best known for his photographic essays of San Francisco’s Chinatown and China, which capture the spirit of these communities and convey a sense of universalism. Robert continues to document urban neighborhoods as they are reminders of his own childhood growing up in the inner city of Boston. He is influenced by the work of Robert Frank and Harry Callahan, who also used the camera to tell intimate stories about the American experience.

Robert’s experiences as a truck driver, special education teacher and stay-at-home dad have informed his art as well. He has garnered numerous prizes as well as exhibitions around the country, in galleries from New York to Los Angeles. His photographs appear in the permanent collections of major museums, including the Fogg Art Museum at Harvard University, Brooklyn Museum of Art in New York, Denver Art Museum, Houston Museum of Fine Arts, and the Griffin Museum of Photography in Winchester, Massachusetts.

CHINA ..Having been exposed through my wife and her family to Chinese culture and tradition as they have been translated in the United States, I looked forward to being a part of their sojourn to China.

I experienced a land filled with ancient traditions yet struggling to become modern. Though China is on its way to becoming modern, progress seemed to move slowly, as did the pace of daily life. It seemed that one could bear witness to the old becoming the new.

I explored the streets of my father-in-law’s village, Zhongshan. in southern China. He immigrated to America when he was eighteen. We found his boyhood home with many of the family’s relics still intact. It surprised me that, though the house had been empty for many years, no one had touched the family’s possessions. I could hear the pride in my father-in-law’s voice as he showed me the house in which he grew up. The realization that one could leave property far behind, trusting that no one would disturb it, was profound for me.