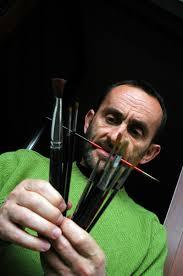 I was born on April 29th, 1959, in Albania, the youngest of a large, cheerful and very loving family. I grew up in the small town of Blinisht which was surrounded by tall towering mountains and the fields everywhere were covered in flowers and many varieties of birds hovered over-head. An equal variety of small animals lived out their short lives in the fields and woods. Very rarely an aeroplane circled in the limited space of the sky, a solitary visitor from the distant modern world. Glorying in the magnificent sunsets from this patch of untouched country. I made so bold as to send notes by way of the sun to the far distant civilised? or was it? country out there. At night, when the sky was giddy with stars, I stepped along the moon beams to another on the moon beams to another civilisation on the moon's disc. A few words taken from my surroundings and from a handful of books unlocked my ardent imagaination: clouds and fields and stars, the Sistine Chapel, Michelangelo, eagles, Leonardo, poor blind Homer, Christ and the Virgin. I dreamt of them all until punctually the crazed roosters woke me up. And so in this garden of Eden I spent my childhood and from which all my later fantasies were to spring. At fourteen I left my Eden and entered the twisted paths of the world of art: to be exact, I went to the Migh School of Art in Tirana and after that continued at the Academy of Fine Art from 1981 to 1985. By a stroke of great good fortune, I then found myself in the only studio of cartoons in Tirana. My delight in the fabulous, where everything is possible, undoubtedly originated in my childhood fantasies and dreams. The moon shed its gentle beams and could climb up and up, toy with stars and win a prize the rhird prize at the 1990 National Festival at Tirana. I then voyaged in the wonders of the cinema and took part in the International film Festival of cartoons in Annessy, France, which took place in June, 1991. Yes, I actually rubbed shoulders with the great Bak and the equally great Busseto...

xhovalin hasn't uploaded any images yet. Please check back soon!