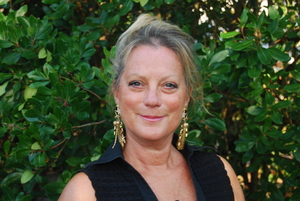 At age 20 I moved to Paris and studied at Atelier Albers for two years, a school that prepares pupils who wish to join any of the major Art and Decoration schools in France. The classes were taught by two painters and an architect...

Simultaneously I discovered psychology, psychoanalysis and Sophrology in which I took a great interest. I chose this profession and was a psychotherapist in Paris for over 25 years.

I continued to draw and paint, went to fine arts school in Auxerre, Burgundy. I have a country house there. 10 years of happy exploration... and a lot of personal work.

I ended my therapist career in 2006 at age 51 to become a full time professional artist. I started a new life and concentrated on my passion for painting.

After a number of exhibits all over France since 2000, I have created my own "La LiLa" galleries :

March 2007 in Burgundy near Chablis, in the workshop of my country house and later that year I bought the village café and turned it into a gallery and tea shop.
In 2009 I have opened my workshop in Lacanau by the Atlantic Ocean and in 2011 I had an extension built.
In February 2010 I have opened my gallery in the heart of Paris, near Les Halles and the bustling Montorgueil street.

Egyptian goddess, great goddess of the sky and the night. She is the star-goddess representing the Infinite and the ultimate expansion of the universe. All things emanate from her body. She was among the first generation of goddesses. She emerged from the original nothingness or essential chaos.

African goddess of the sea. Together with Oshun and Oya (guardians of the river Niger), Yemaya is believed to be "supreme in the art of mystic punishment" and protected her followers "against all evil". Yemaya is a charitable goddess and women used to appeal to her for help during child birth, it is the goddess to prey to for fertility, in particular for women who have difficulties conceiving.

She is being called "the Great Compassionate" and she is considered to be the Goddess of Clemency, because she halts an instant on the Way, to observe mankind and lend a mercyful ear to their suffering.