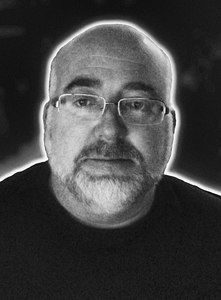 Allan graduated from Rochester Institute of Technology with a BFA in photography. In the 1990’s he photographed fashion photography in Los Angeles. During his time in LA, he began creating images of the western landscape as well as photographs of equine sports and portraits. Many of Allan’s works are held in private collections throughout Southern California. In 1998 Allan relocated to the forest landscape of New England. It was during this time in Maine that Allan’s interest in observing and capturing the landscape as metaphor, became a dominant theme of his work. Relocating again to the desert southwest spurred a series of ongoing bodies of work . Recently, discussions regarding his work have proffered questions of the nuances of the relation of landscape and environment to how humans experience life.

“The environment in which we live affects most aspects of our lives. Landscape features such as, the conifer forest of the north, great mountains of the Rocky’s, the expanses of the Great Plains and the deserts of the US South West; mold the culture of it’s human population’s. This connection to the land has been the focus of my work for quite a while. In my body of work titled, “Ridge Lines”, I attempt to convey the energies inherent in the geography and geology of Arizona, more specifically the Basin and Range region of the US South West.

I explore the landscape as a metaphor for the obstacles with which we constrain and limit ourselves.
We are so connected to the world we live in that it’s influence, cannot be understated. Most people commute to work day after day never stopping to view the complexity of the geographical landforms they live among.

I am driven to create a record of these landforms, majestic and inspiring. This motif is not new to photography. The works of William Henry Jackson, Eadweard J. Muybridge, Andrew J. Russell, Timothy H. O'Sullivan and Carleton E. Watkins, have been extremely important in the growth and direction of my art and commentary. I strive to echo the texture of the “Photographic Era of Exploration” of the American 1860’s in my work. As humans we have the ability to perceive the majestic in landscape. Why do we have this ability and why is it’s power fleeting and forgotten so quickly by so many of us.”

Across the night sky

I had to get to Atlanta as soon as possible. My brother was hospitalized and so off I went. As I ventured through the night at almost forty thousand feet above the Earth, one thought coaxed me to pick up my camera. "this is so unnatural, humans don't fly, at least not until recent time.". We are land based animals. We can exist at altitude for only short periods of time, underwater with out assistance we can live only seconds, at forty thousand feet, we freeze and suffocate almost immediately. Yest here I was sitting comfortably, whilst just on the other side of a few millimeters of clear plastic death awaited. I choose to try to understand this place. I was one of the few humans in history that had traveled in this mode. Past generations would have marveled with disbelief at the site of this roaring bird from another time. As I moved across the sky through the night I captured what ever light my camera could. I had a sensor, a sensor that captured registered photons of light. The cliche images photographed through the windows of planes would not suffice. The landscape moved across my aperture was fluid, ever changing. And all I could do was sit and marvel at this place where humans were not supposed to be, the sky.