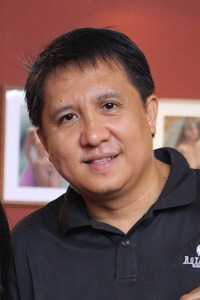 For Norlie Meimban, art is a living, breathing, moving entity. A talented craftsman with a one of a kind imagination, his works are not only aesthetically pleasing but also intellectually stimulating. Coming up with different concepts and ideas to be applied for each work, he makes every exhibit, every collection and every piece truly unforgettable.

A graduate of University of the Philippines Fine arts with major in painting, the canvas had always been his irreplaceable passion. Not surprising considering he came from a family of artists with his father, Ely Meimban also a painter. With feet planted fully in the ground but head freely in the clouds, he went straight to work just a week after graduation and started training in Fil Cartoons. Here he was able to flex his creative muscles in the field of animation. Under Fil Cartoons are memorable works under Hanna-barbera among others and under his supervision were the projects of popular animation such as Joseph the Dreamer of Dreamworks and Tarzan and Lilo and Stitch under Disney Philippines. He specialized as an “in betweener” focusing on the sequence motion of the characters movements.

In his years working in animation he has accomplished much in, however amidst his work is his undying love for painting. While he was doing animation, he never stopped honing and exploring his skills on the canvas. In the span of this time, he joined competitions and was recognized by Metrobank Foundation Art Competition three times. In ’89 an honorable mention, in ’93 he won third place and in ’96 an honorable mention, thus qualifying him to be a member of NET which stands for “network of winners” from Metrobank’s roster of past winners.
To date Norlie has countless group shows, a travelling show and 10 solo exhibits in Sining Kamalig, Rico Renzo, White box, Big and Small gallery and many other respectable art galleries. His forte consists of figurative works with color and monochrome with his favorite subject matter people, specifically children.

As he continues to hone and perfect his craft, he manages to come up with fresh innovative ideas to add more dimension to his painting. Perhaps one of the most ingenious of which is a style which he has dubbed as “Ani-motion”. “Ani-motion” is animation incorporated in painting. Using his knowledge and techniques from his animation work he decided to apply the beauty of movement to his work on the canvas. While a picture on the canvas manages to convey a single moment in time, by combining this with line drawings from animation he creates more depth, meaning and story in one piece, making it active through space and time. This Ani-motion manages to give us not only a picture, but a picture across a span of time. Being the first to push the boundaries of what is known in painting; this germ of an idea began in 2006, started to materialize in 2008 and continuously gained attention in 2009 until present.

Constantly pushing the boundaries of art, he also seeks to make the art more interactive by many concepts and inspirations that are set to impress his followers with his story of motion, color and people.