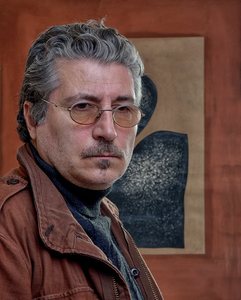 Born on September 11th, 1963, in Plovdiv. He graduated from the National High School of Fine Arts ''Tsanko Lavrenov'' in Plovdiv in 1982. Grandson and disciple of the great Bulgarian artist Pascal Struzhev. Later he did mainly drawing and painting. Then he experimented plastic whith enamel and performed artistic mosaic. In this period he realized two ''hard'', but successful projects whith painting and plastic in time, when Bulgaria was a totalitarian country.

After 1985 he worked hard on mosaics and participated in the execution of the monumental mosaic designed by Boris Dimovsky in Haskovo. Between 1990 and 1993 he worked drawing and painting in Saint Johns and Montreal, Canada. In 2001 he participated in the elaboration of the sculpture figures ''Angels'', which were sets for the staging of Marius Kurkinsky, based on the play ''The art of the comedy'' by Eduardo De Filippo.

Jorj Sopadjiev works in the fields of design, decoration, drawing, painting , wall painting, installation, plastic art, monumental mosaic, performance and pfotography. Galleries and private collections in Bulgaria, Germany, Italy, France, Turkey, Canada and USA prossess works, done by him. He is a member of the Association of the artists in Plovdiv. He lives and works in Plovdiv, Bulgaria.