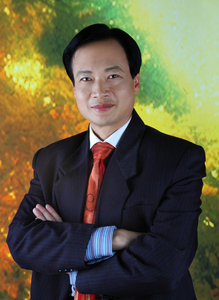 Liu Bihua, also known as Arthur B. Liu is President of Queens Art Education Center, New York, USA, visiting professor of the Guangzhou Academy of Fine Arts, member of the Watercolor Society of USA, artist of the National Art League of USA, director of the Chinese Culture Art Association of New York, USA and member of Lions Clubs International.
Arthur B. Liu has been in love with fine arts since childhood. He started to learn drawing from his teacher Mr. Yang in his teens, before entering Guangzhou Normal Institute and Guangzhou Academy of Fine Arts for further studies. In 1987, as a graduate student at the City College of CUNY, He started to probe into a brand new approach to artistic expression that embraces Chinese and Western arts by absorbing the essence of Western arts and applying the techniques of traditional Chinese painting. The end result was an original and unique painting technique with his patented oil painting pigment under the name “Flowing Colors Oil Painting”. For more than 20 years, Arthur B. Liu has never ceased to pursue his study and creation. Every year, he has been participating in art exhibitions and painting contests, winning numerous prizes in the process. In 2001, he won the gold award in the World Peace Contest held in Houston, USA. In May,2008, he was recognized as “One of the Top Ten Most Influential Painters” at Beijing International Art Expo. In May 2010, he was given the Golden Award at Shanghai International Art Expo held during the famous Shanghai World Expo. In December 2010, he participated in Guangzhou International Art Expo, bringing home the Prize for Work of Excellence. Thus, Arthur B. Liu has been awarded the highest prizes at international art expos held in three famous cities in China--a great feat that can only be accomplished by a talented artist who has been working diligently on his art works of love.