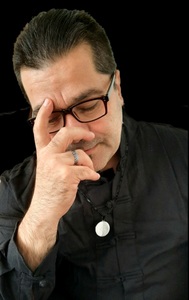 From politics to poetics.

Between tradition and modernity: tapping into memorial exploration to nourish collective consciousness.

By placing interiority and personal experience at the service of political awareness, Aziz Anzabi relentlessly questions the means we have to rethink the world in order to relieve sentiments of suffering.

“I want to mix tradition into contemporary art because I think that Qajar art is the only style that is solely Iranian, with its own unique framework and techniques”.

Navigating abstraction and figuration his works evokes a symbolic grammar, both biographical and collective. Anzabi's fantasized landscapes - his moving humans, his uncertain and distorted forms - are so personal that they become universal. They are in no way free from technology, quite the contrary: they would not exist without it. By borrowing from the ancestral Qajar tradition, Aziz Anzabi becomes both craftsman and alchemist. This clever mix of technical requirements linked to an approach of memory nourished by loss, gives life to powerful works : unconscious testimonies, timeless sequences questioning our immediate future.

Aziz Anzabi is a fully committed lucid embodiment of a new form of violent poetic activism.

The painting déjà vu created by Aziz Anzabi is part of the vulnerable series which explains war and its effects. The near dried flower shows how the war affects people and the destruction it brings. The dark colours used in the painting all reflect how war destroys and hurts people whether they are directly fighting or not .The women are a symbol of resistance and supporting of life but also can be easily hurt as they are vulnerable. The tired soldiers can reflect the uselessness of war and how it brings nothing but tiredness, destruction, hatred and death. The soldier without a leg who is trying to break the door shows how unproductive war is except of producing more war.

My new project called the vulnerable series is about women and their roles in life and their effect on war.