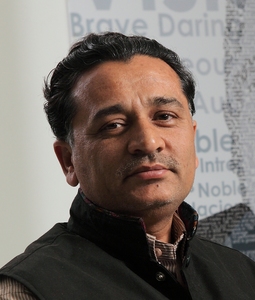 A design & fine arts student:
When i draw, i are actually studying that subject, what we perceive and observe, subject gets registered in the mind and flows through our hand on paper.
Taking the above path i have been involved with academics, teaching at various design institutes as visiting faculty, plus conducting number of workshops related to art & design.

OTHER CREDENTIALS:
2002; My Oil Paintings show at Contemporary Art Gallery Ahmadabad
2003: Acknowledged Entrepreneurship award from C.E.D.
2008; My sculptures on Auto and Aviation. Displayed at Auto expo show New Delhi
2012; My Current work , sketches in streets of Rajkot, are Published Under the title ‘Exploring my way’ In fortnightly tabloid " Rajkot Now."
2013; Painting show at Lalit Kala Bhavan ‘ a tale of the two towers’
http://www.youtube.com/watch?v=QVuh-THCEwY

A Tale of Two Towers

A Tale of Two Towers is a journey between Jumma Masjid Tower and Raiyanaka Parabazar Tower at Rajkot, my place of birth and where my home and office are stationed respectively. It is as well the journey of a common face in the crowd passing in the shadows of the busy market lanes and travelling between these two destinations to etch a place of my own. A fact that mesmerizes me as a seventh generation in the same place is that this same stretch of the road between the two towers has been a witness to my fathers and forefathers settling down here, traversing the same path, dwelling between these two towers, and growing in their occupation and family. In fact the mutuality of witnessing is even more fascinating: today’s Raiyanaka Tower of Rajkot was built in 1892 by the British engineer Sir Robert Bill Booth, but my ancestors settled in the fort area long before the British built their colony. Rajkot then was known as Masumabad during the Mughal era and was fortified in 1722.
These imposing mortar and brick towers loom over multitudes of city dwellers, the bearded and white-clad grandfather tenderly holding the hands of two awestruck boys, the loud vendors praising their wares, the hustling mother with her wailing son in her arms, the noise of the city coming to life and the tired sighs of the same city stretching out to rest in the night. The changing times, changing norms, changing fashions and a sleepy town morphing to a bustling hub of Saurashtra, these towers imbibe in their selves a million narratives of success, of failures and even more tales of aspirations and dreams. The Raiyanaka Tower and the Jumma Masjid tower, the two sentinels of my childhood are not just brick structures. They are my guardians, my confidantes, my guides and the cornerstones of my psyche. Their silent presence is a balm to many a harsh days, a friend without expectations and an inexhaustible inspiration to my brush.
It is thus that I feel that a place remains. It is always there before a person, and keeps waiting after the person departs. People get attached to places, call a place their own. They inhabit a place, building a house that becomes a home, a road that was once their childhood lane, an embankment where they spent many a day of their youth, a monument that remains anchored in their emotion as a landmark, a rendezvous, a turning, a parting. Places inhabit within people, giving them their identity, often defining them. For me, in my moments of imagination, a place is not simply a mute witness. It tells a tale, albeit one must have an ear for it, or apprehend it through the inner eye.

This set of drawings is an endeavour to evoke the place residing in me, a seventh generation dweller in this same place, by a lane that stretches, that ambles, canters, and rushes always between these two towers. The drawings and paintings then collectively is a tale – A Tale of Two Towers – that I try to tell today, but maybe, more appropriately, am myself told in it.