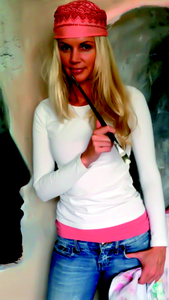 I'm a self-employed Artist.
For my works I use different materials such as acrylic paint, oil paint, oil pastels, watercolor, chalk paint, tissue paper, sand and many more.
Often I use miscellaneous materials for one picture.
I prefer large scale canvas, but sometimes I also use cardboard. When I start a picture I have no specific idea of the picture’s final form. I just start with an idea, inspiration or feeling and then develop the picture.
Painting fascinates me since my childhood. I remember that at the age of 4, when I was in kindergarten, I painted so many pictures that my kindergarten teacher limited the paper, I could use per day because I painted too many pictures. At the age of 11 I won an art contest and at the age of 15 one of my pictures was given by one of teachers to an exhibition which took place in the Ministerium der Bundeshauptstadt Hannover.
I continued to paint until I was adult.
So the painting went like a red thread through my life.
But until then I had always seen the painting only as a thing that I love to do.
6 years ago it was like an intuition, I suddenly had the desire to present my work to a gallery.
The gallery took some of my pictures and sold them.
Soon afterwards I made German-wide exhibitions even in well-known hotels like Steigenberger, Hilton, Atlantic, Maritim and so on.

At this time there was a crucial event for me. One of my exhibitions, the organizer invited purely a renowned us critic who should say a few words to my works. I had never thought about it that I had not attended arts collage, I thought he wants to take apart my pictures and guidelines of the design fault I've not held it etc. .But he did nothing about it-on the contrary, he praised my work and my self-thought skills. Then I realized something very important for me: in art, is probably the greatest freedom at all. There is no right or wrong, this is something which makes me very happy and let me work freely. So I can bring my personality, my experience, and emotions without limitation in my works. I feel praised when my paintings evoke emotions in the viewer. I think this is one of my important goals. . Another goal of mine is to create something lasting.
Currently I am working with the New Yorker gallery Agora together. Cooperation began in June 2013 and takes a total of 18 month.
In 2014 I plan an exhibition in Shanghai , China.