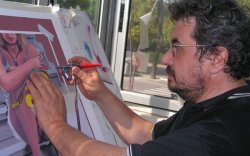 Valter Fiorani was born the 28th of october 1953 in Faenza.

Since 1963, at the age of 10 years went to the school of drawing "Tommaso Minardi" in FAENZA with Masters like GAETA, MATTEUCCI, SAVIOTTI; at school during 3 years he studied pencil drawing, copy from real, geometric composition, painting and ceramic plastic art.

At the same time he studied music and guitar self-taught.

In 1963, once finished the drawing course, at the age of 13 years he founded his first band.

Since 1969 was a professional musician into orchestras for dance, night, shows etc.

In 1974 he enrolled himself at the Faculty of Architecture in Florence.

In 1978, fascinated by metaphysic and surrealism, in particular by Dalì, he started painting in oils above sanded backgrounds, women-mannequin into futuristic settings.
In the same year he appeared in an art catalogue and he attended his firsts collective exhibitions and met his firsts recognitions.

In 1981 he started collaborating with graphic offices.

In 1984 he attended classes of commercial art and illustration.

From 1980 to 1998 he worked as graphic designer, free lance and for advertising agencies.

While working in harness with illustrators, he learned to use airbrush and its potenciality, the tool he is currently using for the realization of his works.

Since 2002 he has been working exclusively with airbrush.

In 2006 he was selected for the international prize "Web Color" (painting section).

In 2007 he was invited to the international website "SAATCHI ON LINE GALLERY – LONDON".

In 2008 he has participated in the international airbrush competition "Linea Rosa" (city of Ravenna).