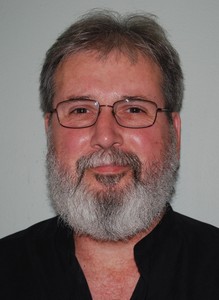 Ric Conn is a figurative painter, painting expressionistically with a modern edge. His body of work focuses on the spark of sensuality. Whether the model is imitating a legendary or iconic character, or creating an original pose, every pose has its own certain something that appeals to the senses, which is his subject.
Ric’s artistic career began at age 5 with his first freehand drawings. When he placed first an apple then his hand in the sunlight on the table intending to draw light and shadow—his passion for figurative art began
Working additionally as a freelance photographer, printer and graphic artist to help pay the bills and raise his family. Ric is now a full time fine artist.
Ric won the “Face of Queen Anne’s County” medal for one of his oil paintings. His awards also include First, Second, Third and Best in Show awards as well as numerous Honorable mention awards and Award of Merit certificates. He has been featured in articles in several newspapers, and magazines, and interviewed on television, both local and network.
Ric has had solo and group shows in Baltimore, Columbia, Annapolis, Frederick, Washington, D.C., Stevensville, Centreville and Chelsea, New York City.
Ric teaches painting and drawing workshops in local schools, arts council, an environmental center and he gives private lessons in his studio. He has also given portrait drawing demonstrations in Stevensville.
He has paintings in private collections in several states and Australia.
Ric Conn was born in 1951 in Baltimore, Maryland and studied at the Corcoran College of Art in Washington, D.C. and the Maryland Institute College of Art. He currently lives and works on Kent Island, just off the eastern shore of Maryland.

My face paintings are not portraits. Portraits are about the sitter, my face paintings focus on the face as the subject. I have always been fascinated by facial features. The eyes, nose, mouth and skin are incredibly fascinating, so much personality in each feature. So complex, each face is a world unto itself. To me, the story is in the face; the face is the subject of my compositions, not the person wearing it. Emotions revealed in the face are ultimately what I want to capture, and correctly painting the facial features is what keeps me fascinated.

My figure paintings evolve from my face paintings. To me the body accentuates the expressions and emotions born on the face. The body brings its own challenges to the canvas and is an integral part of the overall story.

Painting on Cardboard is a tradition that goes back well over a hundred years. It started because cardboard was cheaper than canvas. The paint handles so differently on cardboard and is so interesting that it is a fascinating substrate on its own.

“Girl on a Chair”

“A Modern Snow White and the Apple”