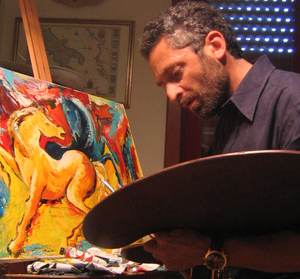 Riccardo Luchena was born on the 28th October 1958.

His career began when he was very young with works of free composition. They are endowed with fantastic solutions even if they are based on a solid and classic system.

Later works show great chromatic contrasts, whose origins are in the fauve and in the expressionist movements, to which he is still linked. He studied sciences and then he took a degree in medicine and surgery. He now works as a psychiatrist but he devoted himself to painting too. He is convinced that you learn to paint directly from the works of the greatest artists. He went to many art exhibitions and to many museums in order to look at the works.

In the laboratories of the local artists he learned different and then he began his works thus obtaining great success from the public and from the critics. At the end of the 1990s he founded a cultural and artistic society called Clitunno which works both in the pictorial and in the musical fields. He is always a painter and a musician with a big production.

His images are strictly connected with the reality and endowed with a strong chromatic sensibility, where colours, which sometimes are exasperated, are set on the canvas sometimes with moved strokes of the brush- with a clear reference to Van Goghs painting and to the expressionistic culture- sometimes in a fluid way thus suggesting a chromatic and intense expression or soft lyricism.