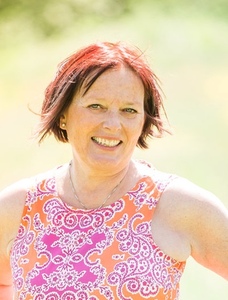 www.kariart.net
- at times rhythmic and other times fearlessly exposing the rawest elements of the human emotion.
(Lisa Bently, ArtApproach, NY)

Kari Elisabeth Haug was born in 1956 in Norway. From her childhood she has used her creative ways of expression, and as a child she won several prizes in different drawing competitions. Her music abilities are very important for her art. She plays the piano and writes poems to her paintings.

Growing up on a farm and now living by the sea have had an important impact on her art.
Education and experience of life have led to the interest of existential questions.
Therefore, for her, it is not important to paint what you ”see”. The challenge is to paint what you perceive.

For many years she has been working as a teacher in esthetic subjects. It is however in the recent years she has been able to develop her own expression in her art.
After her first solo exhibition in the theatre of Drammen in 2008, she was contacted by Saatchi Gallery in London. After this she was invited to the biennial in Florence. Since then her paintings have been exhibited in several solo- and groupexhibitions in Norway,
New York, Rome, Paris, Vennice, Florence, Istanbul, Las Vegas, Monaco, and they are also published in artbooks and artmagazines in Europe and in the US. She also has a permanent exhibition at the Holmsbu Bath and Fiordhotel.
Southern Nevada Museum of Fine Art, Las Vegas, has her works in their collection.
You may also see the videopresentation under Gallery or
http://www.youtube.com/chanel/UCqbQPVsNflukb6xSD A 9Aw

..it is personal biography meets movement, passion and a very physiological presence…
Amidst a sea of art, you manage to say something very different.
(Lisa Bently, Art Approach, NY)
We have Haug to thank for bringing the spirit of her visionary world into ours. Haug finds her ideology in the deep contours of creation. It is her acute love and understanding of color, composition, and positivity that lends comparisons to Picasso, Edvard Munch, Rothko, and Chagall.
(Persis May Singh, kunsthistoriker, USA)

The dynamic expressiveness of the berushwork - that can be intense or intentionally contained - creates visual, chromatic and compositionally-balanced solutions, and thus, is fascinating. The balanced and ordered structure of the paintings still allows for fast and strong impulsivity and improvisations that reveal the intense tension of feelings within the painter, transferred on canvas and presenting the more instinctive side of her personality.
(Paola Trevisan, TrevisanInternationalArt, Italia)
She courageously goes beyond the given and familiar, pioneering new techniques and materials in order to expand her own vision. The magic emerges in the tension between control and spontanety, and the result is invariably surprising, open-ended, poetic, and spiritual.
(Persis M Singh, kunsthistoriker USA)

Statement.
As an artist I wish to be conscious about what message I want to tell in my paintings.
Often I work in an intuitive way, but I am very aware of what is important principals in the process of my work. Life has given me both great joys and challenges. Many critics of art seem to recognize this tension in my pictures.
When I compose pictures I wish to show that man has freedom to develop and to be in change.
Rough strokes of the pen and powerful colors shall symbolize power and energy. The more tender parts of life are symbolized by transparent parts and careful lines.
Freedom to create my own style is very important. It is essential to tell that every human being is unique and that the perfect is impossible to find. I wish to create pictures out of my imagination and not to copy any others.
Red and white have always meant something special to me. Like when I got my first red bike. With this bike I suddenly became mobile and the red color made me feel strong and visible. The white color invites me to the sacred room. I get an impression of devotion because in this room there is peace for soul and mind.
Literature and music will always be my companions. Harmonies and sounds can be transformed into moods on the canvas. The tune can be the line in the painting, tender and powerful, dreaming and sparkling. I often get the impression of being in the trinity between colors, words and tunes.
In the end the picture is transformed to the viewer and his world of fantasy. There it will be a part of further creation. The answer or the solution shall never be given on beforehand.

Man has through all times longed for and needed to anchor in a safe harbor, to find a small boat and to sail…. To fantasize about safety and security when in danger, dream about freedom when in prison, hope and believe that there are still possibilities when in troubled waters.

The situation today, many people feel the restlessness, many requirements...it is difficult to find yourself.

To control your own life.

Acrylic on linen/polyester. From the Soloexhibition, Sognando Edvard Munch, in Rome, Italy, 2013.

Haug Kari Elisabeth
Norway kariart.net
In her compositions the simple lines highlighted by the use of strong colours, define the artistic work of Norwegian artist and put the light on the meaning and the reflection about each of her artworks. She starts from the choice of themes to report on canvas, such as the philosophical sciences, the soul, the existentialism, but also the curiosity about the people with their own lives and challenges to deal with. In this perspective, she calls for the possibility that the viewers immersed in her colours and lines, can look at beyond themselves to achieve the knowledge. The colour is spread on large canvases, which is a peculiar feature of her artistic research, strictly acrylic due to its velocity.