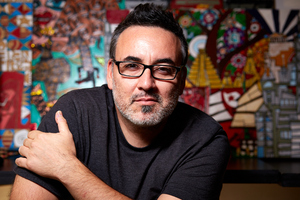 Self-taught artist which researches, works, and found their own forms of expression. He studied at the Faculty of Architecture, Design and Urbanism of the University of Buenos Aires. It is one of the creators of Bondi Band, animated series: Disney XD, Televisa, Telefe). Participates in TEDxColoniaDelSacramento. Exhibits at Teatro El Cubo, where he began a cycle of collaborative works with the actors of the different casts arising there.

Works with Banco Hipotecario in ¨Dueno Arte¨ (Art-Owner): Reinoso creates based on the experiences of people who share with him their most precious memories. Performs the Mural tribute to the great architects and designers of the modern history. Peter Kent developed a limited edition of objects for the firm.