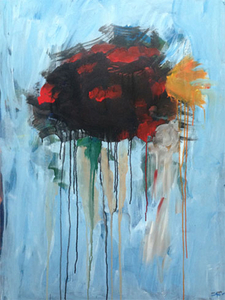 Hao Jing (b.1978 in Shanghai), is a Hong Kong and US-based Chinese artist and contemporary painter. Hao has painted from childhood, a natural progression as she hails from an established artistic heritage, which has inspired her to continue the family tradition. She is a descendant of the famous Chinese artist, Wei Qi Mei, as well as the renowned Chinese-American painter, Hao Jia Qi, who is her uncle. The inspiration of this filial tradition strongly inspires and influences Hao’s work, as she seeks to innovate within the milieu of contemporary arts.

Hao is a graduate of the Shanghai Academy of Fine Arts, receiving her BFA in Fine Arts Education in 1996. She then moved on to study at Dong Hua University, with focus on Fine Arts, Interior Design and Performance. Hao was scouted by Metropolitan Modeling Agency and sent to Paris, where she began her parallel career as a top fashion model, working for Karl Lagerfeld, Vivienne Westwood, Armani, Givenchy and many others. Her time in the fashion industry saw Hao travel the globe, living in New York, Japan, Milan and London. These rich experiences contributed greatly to her artistic development, imbuing her work with an intuitive aesthetic sense and allowing her to develop a keen eye for discerning stylistic artistic trends.

Hao's work is driven by her instinct and imagination, drawing specific influence from her cosmopolitan upbringing and career. She has also been profoundly influenced by groundbreaking modern arts figures, such as the German artist, Gerhard Richter, and the American artist, Cy Twombly, whose work continues to inspire and motivate her.

Hao’s current work seeks to intuit the depth of life’s feeling and panoply of emotion, revealing a vivid imagination conveyed through a rich tapestry of color and technique. Her latest editions use the motif of the fish, which holds a special place of significance and meaning in Chinese culture, to represent the artist’s critique of the pervading sense of emptiness in the world, and the need to explore the spaces between and to bridge the gaps in life’s journey. Drawing on her experiences in the world of haute couture, color and shape is used to infuse the series with a stylized abstraction, embodied in the image of the fish to convey life’s true meaning and the gamut of human emotion. Hao’s current portfolio continues thematic usages and motifs from her earlier series, “Under the Wave.”