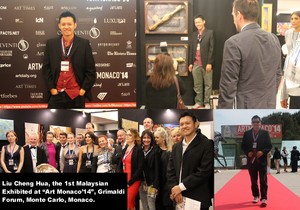 After concentration in a series of La Root is more synonymous with the mining of tin, I’ve started a new series of Raub which widely known in gold mining activities. Raub is a district and town in the state of Pahang, Malaysia. Gold mining started in 1889 by William Bibby under the Raub Australian Gold Mine (RAGM). Malay word “raub” means “scoop” which according to J.A. Richardson in his book, The Geology and Mineral Resourses of the Neighbourhood of Raub, Pahang, page 36, “People found that for every “dulang” (tray) of sand there was a handful (raub) of gold”. As a result, Raub became very famous in early of 20th century for its mining resource (gold). In the piece “Gold Shaft I,II,III,IV and V” show the abstraction form of gold mining techniques in Raub “shaft mining”. In the other side, the bamboo that I used itself were growth originally in Raub. Gold Shaft I and II exhibited at the “Art Monaco’14”, Monte-Carlo, Monaco. Gold Shaft III exhibited in conjunction of Kuala Lumpur International Jazz and Arts Festival. Meanwhile, Gold Shaft IV in Awarded "Collective" by Biancoscuro Art Magazine which will be held September 7, 2014 at the exhibition space BIANCOSCURO in Pavia, Italy, while Gold Shaft V exhibiting at Galeri Chandan, Kuala Lumpur for the “Pulpa Exhibition”.