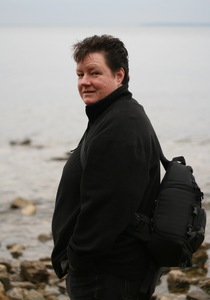 Kellianne O'Brien is a self-taught artist who has exhibited in San Diego, Miami, New York City and the Virgin Islands and internationally in Montreal, Crete, Mallorca, London, Barcelona, Bologna, Florence, Venice, Sicily, Milan and Rome. Kellianne’s artwork has received numerous prestigious awards. Her artwork is in private collections in San Francisco, Miami, Puerto Rico, Barcelona and Milan.
​
Kellianne began her art career in 1994, mentored by Mona Webb, a celebrated outsider artist who taught students in her home, the Wayhouse of Light, in Madison, Wisconsin. Mona taught Kellianne how to live a spiritually fulfilling life and encouraged her to paint colorfully on a large scale. Since that time, Kellianne has produced a large body of work - abstract paintings, figurative sculpture, pastel works on paper, and seascape photography - which she has promoted and exhibited internationally.

Kellianne O’Brien’s painting and sculpture are born of a spirituality which derives from overcoming a very difficult past. In 1995 she began to experience traumatic emotional difficulties.
​
While enduring what St. John of the Cross describes as "Dark Nights of the Soul," Kellianne created art that both encouraged and reflected the spiritual awakening through which she healed herself.
​
As an undergraduate student of French and Philosophy, Kellianne spent a year in Nice, France, where she was deeply influenced by the extraordinary beauty and unique light of the Mediterranean. Later, in 1999, she participated in the International Mental Health Network Conference in Ennis, Ireland. She was moved by the colors she saw in the country of her ancestry. Upon returning to the United States, she created a series of paintings that reflected the great beauty of the Irish countryside.
​
Kellianne O’Brien’s paintings, sculpture and photography continue to reflect her inner journey. She says she is grateful for the joy art brings to her life. A deeply spiritual person, Kellianne views making art not only as an act of artistic reverence, but also as passionate expressions of spirituality. One person likened the effect of viewing Kellianne's paintings to “being in a cathedral.”