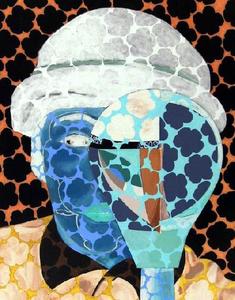 Baboute Benyamina is a painter and sculptor born in Saint-Etienne in 1969.
Student in fine arts from Saint-Etienne from 1992 to 1996, he was influenced by Henri Matisse and Claude Viallat.

He lives and works in Saint-Etienne. Formed by Philippe Louisgrand and Philippe Favier, he graduated in 1996.
He began working in the textile industry with his family in the 1980s. It uses in its early stages of recovery of materials such as canvas umbrella to create his works. In the 1990s, he began to use a pattern found regularly in his latest series.
The paintings Baboute Benyamina are intrinsically linked to the image of women, its historic symbol, its mystery. By a set of juxtaposition of figure and form, emerges a being that calls unnamed. Only figured reminder of the presence and existence of the subject dominates the canvas. The reader is thus caught in a fleeting expression, an outline, a shadow. The face is animated by the perception of the other which absorbs the lines, colors and lights. The motive for his code, it is identical, and yet so different. The portraits are fragmented. How to reconcile a figure and an abstract painting, how to layer visual languages??? This is the issue of creation of this artist.