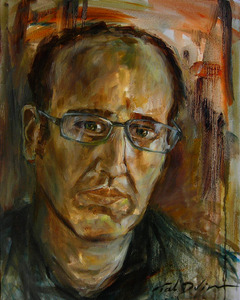 Tal Dvir, 43, resident of southern California, establishing his career painting impressionism to realism contemporary style. Seeking for own style and looking to stay true to His painting passion, Tal is striving to paint anything he feels inspired with... Emphasize on perfection (pre-paint studies) impresses the viewer through deep contrasts. The right light and shade creates the illusion of reality through smooth to fast and almost abstract brush strokes. Tal showed in several group exhibitions in Israel as well as in California. Tal exhibited a natural talent for art by the age of 3 when his mother began supporting him to develop his talent. At 16, he was admitted to the prestigious Witzo Art School in Tel Aviv, Israel, where he discovered the technical skill-sets necessary to compliment his natural abilities, practiced under professor Rosen, famed for his anatomical drawings and realistic compositions. After graduating school he served three years compulsory service in the Israeli army, experiencing the deep suffering and hostile world of the Middle Eastern geopolitics first hand. The experience had a profound, lasting impact on Tal's approach to his art. "Living and bonding 24/7 with the same people for three years in a perpetually hostile environment gave me self-awareness, a truer sense of my own complexities that manifests in the way the brush hits the canvas". As a young artist looking to be involved in the art world, he moved there after to Tel Aviv and studied two years in Meimad visual art school. Then, continued studying for two years until graduation in Kalisher art school with reputable and respected art teachers Maya Cohen-Levi, late Michael Segen-Cohen, and Asaf Ben-Zvi among others.
Tal is somewhat a city boy, nevertheless, always attracted to the country sites.
Passing most of his mature life in Tel Aviv, and then one year in New York, he decides to move to Ztfat in the north of Israel, attracted to wilder natural landscapes, different than the city views he was surrounded with when growing up.

Inspired by the great local landscapes, Tal incorporated the views' details in his impressionist style that was influenced mainly by the great masters: Velasquez, Degas, Pissaro and also by American artists such as Sargent, William Wendt and other early California artists.

In 2000, after having exhibiting his art works in several group shows, bars and cafés around Tel- Aviv, Tal had his first big exhibition Dialogue, as a joined show with his friend the artist Juan Carlos Bronshtane, at the Amalia Arbel gallery in Tel- Aviv, showing 10 large oil paintings on canvas.
The name of the exhibition - Dialogue - represents the dialogue in the art sense between the two friends who reacted one to each other's painting. Tal moved with his wife and two kids to US in 2006.

Currently concentrating on a series of figures, landscapes and seascapes he continues to follow his favorite style - contemporary realism impressionism.
Tal's paintings express figures in every day's life scenes as well as pre-directed poses, along with landscapes that are inspired by the California's great outdoors.

As an artist who knows his way through his art, Tal had accomplished finding his painting style that he sought through his entire art career. He lives and creates in Irvine California, inspired by the Californian cities and landscapes. Recently began teaching fine art to kids in Irvine Elementary schools as an IPSF (Irvine Public Schools Foundation) authorized instructor. Currently teaching at 4 Irvine schools and conducts his own art classes to children that started their art education with his program at schools in previous years.